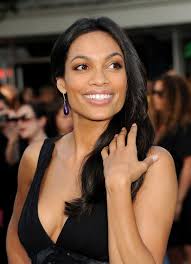 Dawson in X-Verse – Rosario Dawson is quickly becoming a comic book icon. First it was Men in Black, then the MCU’s Night Nurse, and now the X-Verse. She’ll be playing Cecilia Reyes, allegedly, a mutant doctor. She’ll apparently have a major rule in the upcoming “New Mutants” film, as James McAvoy and Alexandra Shipp (Charles Xavier, Storm respectively), are not in the upcoming film. Her character will apparently serve as a mentor to the new mutants. Which I’m not complaining about at all, cus…Rosario Dawson…duh.

Black Cat Film a Go? – Gina Prince-Bythewood is on board to oversee the upcoming Black Cat film, but there’s a catch, she’ll be joined by Marvel mercenary Silver Sable (no, not Brock Lesnar’s wife). The upcoming film that’ll now pit Sable and Black Cat together will be entitled “Silver and Black”. No plot details have been revealed, but it’ll probably be a situation where Sable and her rogue team recruits Black Cat to save the world.

Unused Static Shock – Static Shock was almost in the new “Injustice 2” video game according to new concept art for the character, which you can see below. I wouldn’t mind Static but it’d made more sense that it was Black Lighting, as they have similar power’s and Lighting has a better costume. The big problem I have with Shock being in the game has been his removal, or at least alleged removal, from the DC Universe. The folks at DC have been trying to restart the DakotaVerse, the home to Icon, and Static Shock, and have since eased up using those characters for the interim. There’s no word yet on if and when the Dakotaverse will be relaunched, but frankly, I’d prefer everyone was in ONE universe. I’m not digging the new WildStorm universe either. I’d like to see a lot of third tier characters like Static, Icon, Grifter and even Spartan in the next Injustice game, as long as they go back to one unified universe.

Quick Hits – John Wick 3 currently being written. Pirates 5 ransom possibly a hoax.
The Final trailer for “Batman and Harley Quinn” has been revealed