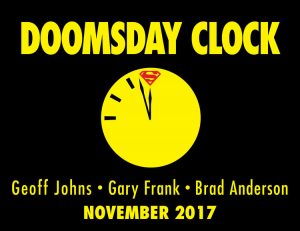 It’s another Monday and we have some big Rebirth news and our first official look at Fox’s “The Gifted”. Should be a fun day, so lets hop into it!

DC Rebirth Update – Geoff Johns has confirmed the long thought idea that Dr. Manhattan was behind several of the biggest mysteries since the starting of Rebirth, and the conclusion of the Darkseid War. The series is going to “begin” in a four page prologue at the conclusion of the Batman/Flash “Button” crossover.

This will not be a fight between Dr. Manhattan and Superman though, Johns said. The story will officially launch in November of this year.

The Gifted Trailer Debuts – The first official trailer for “The Gifted” has dropped and it looks brilliant. However, it is a Fox show, so expect a “ground breaking” first season, followed by a gradual and stark decline. But until then, we should get some great television.

Why “Gambit” Director Left the Project – Doug Liman replaced Rupert Wyatt as the director of “Gambit”, due to Wyatt’s scheduling issue. Liman’s reason though is different, as he explains in a new interview, saying;

When I went to make Swingers, I showed the script to a friend of mine, and she said, ‘Why would you want to make this movie? The Trent character’ – who was played by Vince Vaughn – ‘is totally unlikeable,’ I was like, ‘Oh, my God, I love Trent! That’s the reason I’m making this movie!’ She was like, ‘You’re crazy! He’s totally unlikeable!’ And then, I made the movie and she saw the movie, and she was like, ‘You’re right, he is likeable.’ And then, I went to make Go and I showed the script to the same friend, and she said, ‘I don’t know why you’d make this movie. Nobody in this film is likeable!’ Right in that moment, it clicked. I was like, ‘I get it! I need to make Go, for the same reason that I needed to make Swingers. Somebody else making Swingers might have made Vince Vaughn’s character into an asshole and been judgmental about him.’

Quick Hits – Adam Warlock will not appear in “Avengers: Infinity War”.
Amazing first look at Predators. James Gunn would love to use Annihilus, but can’t due to Fox owning the property.