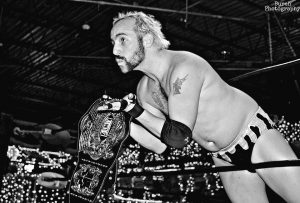 Independent Wrestler Passes Away – PWInsider reports that Florida independent wrestling talent Wayne VanDyke has passed away. VanDyke performed as Richard Delicious, and he was only 29 years of age. VanDyke reportedly collapsed after a match for the Ronin promotion in Florida on April 29, and he was then rushed to a hospital after suffering a heart attack. The report states he then suffered another two heart attacks while he was en route to the hospital. He was then put into a medically induced coma on the same day. He never recovered and died today.

VanDyke was active for a number of wrestling promotions in the Florida area. He also worked behind the scenes for a number of WWN promotions. WWN has also announced that any money raised beyond the expenses for their upcoming shows would be donated towards VanDyke’s medical bills. On behalf of all of us here at NerdCorp, we send our best thoughts, condolences and wishes to the friends, family and fans of Wayne VanDyke.

Alexa Bliss Speaks – Alexa Bliss recently appeared on Chris Jericho’s “Talk is Jericho” podcast to talk about a multitude of subjects. When asked about portraying a heel, this is what she had to say…

“It’s a lot of fun. Like when I first found out that I was going to be a heel I had really bad anxiety because the character I portrayed before that was very bubbly, very Princess, completely not relatable whatsoever, so when they told me I was going to turn heel I had very bad anxiety because I don’t know how to be mean and make someone hate me so I had anxiety over it. We would have heat drills inside the Performance Center and I would just stop and start crying. In heat drills, you practice being mean to somebody. You grab your opponent, put some heat on him, say something mean and just keep going. It’s a really cool drill, but I would just have really bad anxiety, but then once I got used to it it just became so much more fun.”

She also spoke about transitioning from NXT to the Main Roster as well as her background as a wrestling fan and more.

Brock Lesnar Update – WWE has officially announced Universal champion Brock Lesnar for the following Raw appearance dates. He will not defend his title for the first time until the Great Balls of Fire event on July 9 in Dallas, Texas. He is at least confirmed to appear on the Raw after Great Balls of Fire in Houston the following night. You can see his updated Raw schedule for the summer below:

Oh Brock and a championship reign…