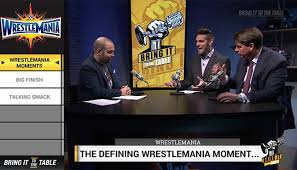 It’s been a long day, aplogoizes for the lack of pizazz in today’s news.

Major Fuck Up – WWE is in hot water with this Mauro Rannallo situation, and they continue to put themselves in the line of fire, especially this past week. Peter Rosenberg, Corey Graves and JBL all made light of Mauro Ranallo’s situation with the company by claiming they all made comments on this show that got them in hot water, save for JBL. JBL simply said he won a small amount of money playing golf. This was done to make light and belittle the issues Ranallo has had with the WWE and the go ahead for this was sent from the higher ups. It’s good to know Corey Graves is a shit bag just like the rest of them.

RAW Ratings in Trouble – Believe what you want, but the reason the WWE can get away with making costly mistakes is due their massive television contract with the USA. If the ratings don’t improve, they won’t be able to get the same payday from the USA Network and last night the third hour was a dismal 2.417. The rating for the night was a 2.696 and was the lowest it’s been since October of last year.

Strowman Update – Braun Strowman is looking to be out for 4-6 weeks to deal with nagging elbow issues. The injury isn’t major but there’s some doubt on when he’ll be able to return to the ring, due to needing to have the procedure in order to know the severity of the damage.

Quick Hits – Kevin Von Erich cites wanting to wrestle with his sons in Israel as the reason for his return to the ring. Ron Killings to get a network game show. Emma leaves WWE UK tour early due to injury. Rusev to return next week in New Hampshire for SmackDown. Vince McMahon wishes Batista a happy birthday, despite rejecting his desire for a final hurrah. JBL was met with ‘Fire Bradshaw’ chants during SmackDown tonight.