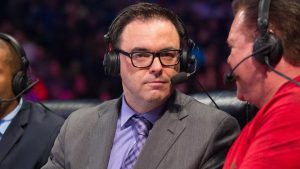 Mauro Ranallo Update – Newsweek.com has released a major update on the Mauro Ranallo situation with WWE and JBL. According to the Newsweek report, Ranallo has officially left the company and is no longer a part of WWE. Ranallo denied the recent reports that his exit from the company was a result of a much-reported conflict with WWE broadcaster John Bradshaw Layfield (JBL). Multiple outlets reported issues of JBL harassing and bullying Ranallo. Ranallo stated to Newsweek,

“WWE and I have mutually agreed to part ways. It has nothing to do with JBL.”

Additionally, a WWE spokesperson also confirmed Ranallo’s departure from the company, but he will remain under contract until August 12.

It was reported not too long ago that a settlement was in the works so that Ranallo could not talk ill of the company. This is probably the settlement at work if he is saying this. So we cannot be too sure if it really isn’t because of Jibble.

Eva Marie Update – PWInsider reported on the latest update on the current status of Eva Marie and WWE. According to report, Eva Marie is expected to part ways with WWE after her current contract expires. Each side is reportedly staying silent on her status, since her time on Total Divas hasn’t been finished as of yet. Eva Marie is still contractually required to promote the show. Eva Marie hasn’t appeared at a WWE event since she was suspended for a WWE Wellness Policy violation back in August 2016. You know, I had seen NXT while Eva Marie was there and saw her in-ring abilities improving and was thinking she could do great things with her heel heat on Smackdown Live. While I would not have minded seeing her back in the ring again, well now she does what she needs to do, so good luck to her.

Damien Sandow Speaks – Former WWE Superstar Damien Sandow recently appeared on Sean Waltman’s X-Pac 12360 podcast to discuss a multitude of subjects, including his future in the wrestling business. Here is what he had to say…

“I assure you the boots are not burnt. You know, will I ever lace them up again? I don’t know. I’m a very transparent person, especially with the fans. I’m not going to lie and say, ‘oh I’ll be back.’ You know I don’t know if I’ll be back maybe I will maybe I won’t you know. But the one thing is I miss the interaction with the fans, I miss the crowds, and I miss being able to kind of like entertain you know. Just put these weird twists on characters I genuinely do miss that. But again where I’m at in life right now it’s just kind of taken me in a different direction not to say that I won’t end up in a ring again.”