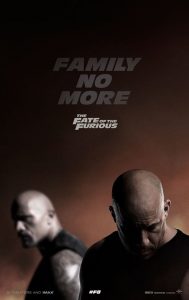 So I’m all ranted out from the pro wrestling news. So lets just talk stuff, shall we?

Fate of the Furious Update – It killed it. Just flat out killed it. Not sure how or why these films are getting MORE popular. But there ya go. The film opened to a solid $530 million dollars, breaking the record that “Star Wars: The Force Awakens” set. The thing though, the movie won’t hit 2 billion in revenue. It released in the major markets all at the same time and I’d be surprised to see it top $800 million. That being said, that opening figure alone guarantees excitement by the studio for the ninth installment of the franchise. Yay.

Man from UNCLE is Getting a Sequel? – I like both Henry Cavill and Arime Hammer. Yet I don’t like period pieces, which Is probably why I haven’t seen “Man from UNCLE” yet. The film did not do great, and under-performed at the box office. However, that has not stopped the folks at Warner Bros. from commissioning a script.

Apparently Armie Hammer had such a great time with the first film that he called the producer and writer of the first film, Lionel Wigram and asked him what’s up. He said;

I called Lionel Wigram, the producer of the movie, and he and Guy produced it and wrote it all together. I was like, ‘Dude, what’s the deal? I get asked about this shit all the time. Can you just write a sequel?’ He was like, ‘You know what? Yeah, fuck it, I’ll do it. Sure, I’ll write a sequel.’ I was like, ‘If you write one, I’m sure we can get one made,’ so who knows? Today is the first day I’ve actually told anyone that story. I only told one other person who asked. Apparently, the sequel is being written right now. No pressure, Lionel!

Wigram can basically do what he wants, due to him serving as executive producer on four of the Harry Potter films, and a producer on the “Fantastic Beasts” films. I wouldn’t be surprised that if “King Arthur: Legend of the Sword” does well, that we’ll get a sequel to “Man from UNCLE”. However, I’m banking on the new Arthur movie flopping. So we’ll see.

New Doctor Who – Steven Moffat and Peter Capaldi are done with “Doctor Who” after this current season (series for the UK fans). Replacing Capaldi as the Doctor is Kris Marshall, who had a role in the smash holiday film, “Love Actually”. The fans are already rioting, because they’re children. They hated Matt Smith’s casting, and now all of them love him. They’re a fickle beast. Marshall hasn’t been confirmed but you can pretty much take it to the bank.