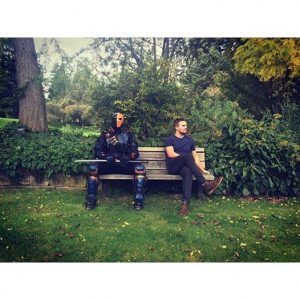 Cable Finally Gets Cast – Josh Brolin confirmed on Instagram that he will be Cable in the upcoming “Deadpool 2” sequel. There isn’t expected to be any issues with Brolin’s Avengers’ deal but this deal all but assumes that Thanos won’t be back in the MCU anytime soon. Brolin is signed to a four picture deal and will more than likely headline the “X-Force” movie.

When you have a man-crush on Ryan Reynolds, what do you do? CRUSH IT!!!!! #deadpool2 #cable @20century_fox @vancityreynolds

Manu/Arrow Update – So there’s some drama with Manu Bennett and Arrow. Apparently Bennett is in New Zealand filming episodes for his MTV show, and denied returning to the show, despite both Stephen Amell and Marc Guggenheim saying he is. Then TVGuide is stepping in and confirmed that Bennett’s returning and either forgot/didn’t know it was so soon or is trolling everyone for laughs.

“Aquaman” Casts Major DC Actor in New Role – Dolph Lundgren has been cast in the upcoming “Aquaman” movie as the king of a rival kingdom, King Nereus, ruler of Xebes. Lundgren had a major role in “Arrow’s” 5th season as a Russian mafia leader.

Major Change to Top DC Comics Title – Greg Rucka is stepping down as Wonder Woman due to the pace of the book causing delays in his other projects. Rucka posted about his decision saying;

Writing Diana again has been an amazing experience, on the level of a dream-come-true. All any of us who’ve worked on the book this last year have wanted is to serve her well, to illuminate what we so absolutely believe makes Wonder Woman such a remarkable and unique and timeless and important character. To have had that opportunity is something that I doubted I would ever get again. Most of us don’t get a single bite at the apple, let alone two, you know? To get that opportunity at a time when Diana is rising to such (long-overdue) prominence makes that apple all the sweeter. That she’s turned 75 during the course of our run is–to ruin the analogy–icing on the cake.

We started Rebirth with a specific, though fairly broad, mandate from DC. ‘Bring her back to her core.“How we did it was up to us. Our success in doing so is measured, of course, by you. ‘Wonder Woman’ 23 sees the end of our ‘primary’ storyline, ‘The Lies/The Truth,’ and ‘Wonder Woman’ 24 serves as something of an epilogue to that tale. ‘Wonder Woman 25′ will, I hope, set a table for who is to follow, and provide for them as much room to work and explore and grow. Diana’s future is bright, that’s what I’m saying.

Rucka’s run has been well received and it’ll be interesting to see where this book goes from here.