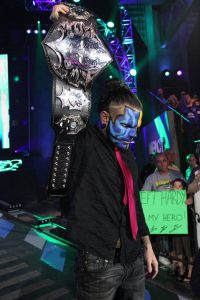 A lot of news today, members of the Space Monkey Mafia. Please keep DJZ in your thoughts and prayers. So lets do this.

Impact Star Suffers Major Injury – In a moment that echo’s the 2007 injury of Scott Steiner in Puerto Rico while working for TNA, DJZ (Michael Paris) has been injured in Mexico last night while working a match. He suffered a major injury taking a 450 Splash, and ended up “fracturing” his colon. I put in quotations as it was reported by Charlie Santo (Gringo Loco) and I’m not sure if that’s the actual term to describe what happened. Santo has been doing a great job keeping fans up to date on DJZ’s status, assuring us that the Doctors down in Mexico believe he’ll recover and “be out of the woods” assuming the next 3-5 days of observations goes well. We all wish the best for DJZ and the last thing we’re thinking about is when he’ll be able to return to the ring. First and foremost, I’m just hoping he recovers and comes home.

In other Shake Up News, there are rumors that Roman Reigns name has been floated to be on the move, but that currently is not the plans, but AJ Styles will more than likely be moved. There are also plans for The New Day to get moved to SmackDown, as well as a Charlotte Flair and Alexa Bliss swap.

Pro Wrestler Picks Impact over WWE – While the new ownership has cause shakeups due to mistrust and uncertainty, the thing about Jeff Jarrett is he can really sell you on his vision. That’s part of the reason why Sonjay Dutt will be following Jarrett back to Orlando with Impact Wrestling. The long time X-Division star left TNA/Impact Wrestling and joined up with Jarrett in Global Force Wrestling, working as an agent and backstage hand for the promotion, while wrestling for them on a majority of their shows. Apparently the WWE wanted him as an agent and producer, but he turned down deals from the WWE and Ring of Honor to sign with Impact. While it’s reported to be a backstage position, I’d imagine he’d follow Jerry Lynn’s career path and still wrestle from time to time while running around backstage.

Big Show Freaks Out – According to Sean Waltman, apparently the minute The Big Show arrived backstage after being tossed out of the Battle Royal at WrestleMania, he flipped out. He was pissed his moment with Braun Strowman was pulled so fast and wasn’t too happy with how the match as a whole went.

Simon Gotch Update – Simon Gotch agreed to terms on his release fro the WWE the night after WrestleMania. There are rumors surrounding event pay, unhappiness with the call up push he received and more. However the WWE as a whole apparently weren’t to happy with Gotch for a while. According to numerous sources and outlets, Gotch apparently had a mouth that got him in trouble a lot, which was part of the reason he and Sin Cara scrapped.

LAX Update – LAX star Diamante will be part of the stables future for sure going forward, having signed a new deal with the company. She’ll factor heavily in with Santana and Ortiz. Impact Wrestling has such high hopes for the stable, they shot numerous segments in Orlando at various indy events, where the team was beating up other wrestlers to be used on air with Impact Wrestling television.

Quick Hits: Total Divas continues to struggle in the ratings. Kurt Angle to get DVD collection. WWE announces deal with SEGA games to create “free”-to-play mobile games. Jeff Hardy’s travel ban to the UK expired in October of 2016, thus making him eligible to be on the upcoming UK tour with the WWE.