I’ve been writing the rage away, so I’m more calm now. However, still call your House of Representative and tell them you don’t want your personal information sold for profit!

Now, Space Monkey Mafia, lets get to the news.

Arrow Bringing Back Major Star – “Arrow” made a mistake in not killing Felicity Smoak last season, and instead choosing to off Katie Cassidy instead. News today however brings much wanted news as Katie Cassidy has been re-added to “Arrow” as a recurring character as her Earth-2 persona, Black Siren. The character is the villain version of Laurel Lance’s Black Canary.

I’m still holding out hope that Laurel and Oliver ride off into the sunset whenever the series comes to an end, and this opens up that possibility.

Would Jessica Chastain Play Poison Ivy? – When asked if she would be interested in playing Poison Ivy in the upcoming Gotham City Siren film, Chastain was very candid saying;

I’m interested in all things where the characters are strong and dynamic, and not stereotypes or objects. I like female characters that are subjects, not objects. And so, if Poison Ivy happens to be that, sure. Throw my hat in the ring

She certainly has the red hair for the role, but what else? We’ll have to wait and see. The only other name anyone is talking about for the role is Megan Fox.

First Look at Tomb Raider – We have the first look at Alicia Vikander as Lara Croft in the upcoming “Tomb Raider” reboot. 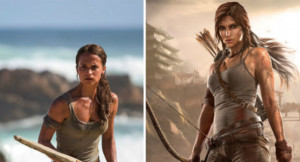 She told Variety how excited she was to get the role;

When I was asked to take on this role I got really excited—Lara Croft is a truly iconic character. I think people can identify with her for lots of different reasons, but for me I very much see her as a model for many young women. She’s trying to carve out her place in the world and connect her future with her past. She also has a fantastic mix of traits—tough, smart, vulnerable, plus she’s kick ass! She is also uniquely different to other characters I have taken on previously. It’s a lot of fun trying to get into Lara’s head and the challenge of getting to grips with such a physical role is an element of this project that I find an absolute thrill.

Venom Movie Happening? – So much for playing nice. Sony is launching an R-rated film starring Venom and all the trappings that go with it. However, it won’t focus or even have Spider-Man involved in anyway. Why? Cus fuck it, right? This R-rated, horror centric film will have no ties to the Marvel Cinematic Universe at all. Cus logic. The film’s expected to premiere next year in October.

Quick Hits: Inhumans will air on September 1st in IMAX theaters, and then premiere on t.v. in the same month on the 26th. Power Rangers race toward a 40.5 million dollar opening weekend. Chris Evans open to more movies as Captain America, if price and schedule is right