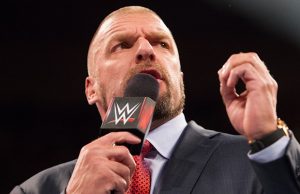 Triple H Speaks – Triple H spoke with NBC Sports about a multitude of subjects. Mainly what he looks for when scouting NXT talent. Here is what he had to say…

“It’s really easy to be nice and be the perfect professional when you feel great, but when you’re on the verge of puking in barrel and you’re exhausted and there’s someone barking at you to do more and the guy next to you just fell on you because he’s at the same place you are, do you help pick him up or do you curse at him and go about your own business?”

“My selection process is different. Yes, I understand what Vince likes and what Vince sees in an ideal archetype performer, but I also know him well enough to know that he likes a lot of different archetypes, so I’m not going to give him one; I’m going to give him a little bit of everything. He’s going to see a Bray Wyatt and go (Vince voice) ‘That’s great!’ He’s going to see a Braun Strowman and go ‘Ah yeah, that’s my wheelhouse right there. I love that.’ He’s going to see Finn Balor and hear the girls going nuts and then see the paint and go ‘Geez look at that, I love that!’ That’s something that I don’t think would have been put in front of him eight years ago.”

WWE does seem to be more accepting as of late with those who don’t fit “the prototype” that Vince was so used to. And it is great to see more progression going on with time.

ROH/WWE Update – It was rumored that WWE was in early talks to purchase Ring of Honor. The rumors stated that WWE would air the show on the WWE Network. Recently, CBS Sports spoke with a source from ROH who has denied the story. In fact, the reportedly high-ranking source said that there is “no story here.” It would seem slightly weird for me with this purchase if anything were to happen, since it doesn’t seem as if ROH would stop being produced, but their tape library would be WWE’s should a purchase happen. I am not sure about this and won’t really care to do too much speculation myself.

Edge Speaks – Forbes recently spoke with Edge and Christian about a multitude of subjects including The Broken Hardys, but also spoke about the recent Paige leaks. Here is what Edge had to say…

“With technology now, you’ve just got to be so careful. Nothing’s truly private… but that’s the world we live in. That’s the way it is now. Sadly there’s a lot of deprived people who think this is—I don’t know—maybe a hobby. But, it just sucks.”