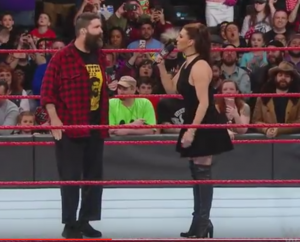 Forgive me for the photo, but Bryan (Brian?) Zane of Wrestling With Wregret talked about how hot Stephanie was from RAW and…well…I’m a fan. So she’s the photo for tonight. Lets get to the news, members of the Space Monkey Mafia.

Update on Jan Ross – Jan Ross, the wife of Jim Ross, is on life support at the moment, as the medical crew waits to see if the swelling in her brain will subside. Ross said the situation was “touch and go”. Ross updated fans on his blog, noting that while the investigation was under investigation, the one thin we do know is that she wasn’t wearing a helmet. He notes that if she was, this wouldn’t be happening.

The situation isn’t great, and she’s described to have suffered “catastrophic brain injuries”. We here at NerdCorp are hoping for the best.

Hardy Update – The WWE and Hardy Boy reunion is hanging up on one obvious issue, dates. The Hardy’s both want part time contracts, and some freedom and the WWE is laughing too hard to hear them. The Hardy’s only have two options, stay on with ROH and work indy dates as they see fit, or sign the big money offer from the WWE. Another issue, unsurprisingly, is the WWE not wanting Reby Sky or her father and son to be included on the deals. A WWE source noted to me that Reby, after she gives birth, would of been on the table but her recent tirade has turned off the WWE from considering her down the road.

Swagger’s Future – Jack Swagger was tweeted by a fan saying that they’ll miss him since he left the WWE, but Swagger replied that his “…reign has just begun.” Swagger will be highly sought after, as he is an incredible worker, and a terrible mic guy.