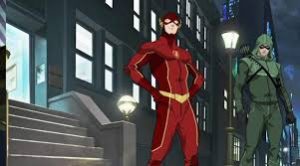 Power Rangers Gay Hero? – The Mighty Morphin Power Rangers remake will feature a main character who’s openly gay. The film will feature Trini, played by Becky G, as openly gay and apparently a pivotal scene that sets up the finale will involve her relationship issues with her girlfriend.

Flash Time Travel? – Barry Allen will be time traveling in an upcoming episode apparently. Former Mad Men actress, Anne Dudek, will be in the episode, playing a Felicity Smoak type character. This particular episode will also feature Tom Cavanagh as the director of the episode.

iZombie Season 3 Debuts Trailer – The best zombie show on television has officially dropped the trailer for season 3. In it, hilarity occurs and that’s all you need to know.

YOUR FAVORITE ZOM-COM-ROM-DRAM IS BACK FOR SEASON 3 – Liv (Rose McIver) has discovered there are more zombies living in Seattle than she previously believed. In fact, there’s a private military contractor employing a small zombie army, and that army is preparing for the day humans learn of their existence. Major (Robert Buckley) was exonerated for the crimes of the Chaos Killer, but is still considered a pariah. He manages to land a job with the one and only place that will hire him. Meanwhile, Blaine (David Anders) is accused of lying. Malcolm Goodwin, Rahul Kohli and Aly Michalka also star. Dan Etheridge directed the episode written by Rob Thomas (#301). Original airdate 4/4/2017.