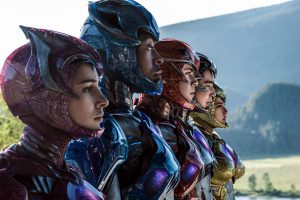 Space Monkey Mafia…lets do this.

Will Marvel Crossover? – If you’re asking Anthony Mackie with hope in your voice, whether Marvel TV and Marvel movies will crossover? Well, don’t. According to Mackie, Kevin Fiege will never put any other studio’s characters on the Marvel screen.

This, and also the fact that filming schedules don’t line up, cause this to be an issue. Now, it should be noted, that they’re referring specifically to the Marvel Netflix gang, and not the Joss Whedon t.v. stuff. You could see the Agents or Inhumans involved to some degree.

Power Ranger Review – A lot of reviews are rolling in, and ComicBookMovie.com has a write up about it that sums up the general feeling for the film, saying;

The reviews are leaning positive for the most part, but the main concern seems to be that the movie isn’t quite sure what it wants to be or who its target audience is as it caters at different points to more mature fans, younger fans, and longtime fans of the original ’90s series. It also seems to excel when it chooses to accept its campy origins rather than forge its own unique path. The finale, as mentioned above, is the biggest highlight as the film takes a major tonal shift, heads into daylight, and brings out the Dinozords for an epic battle with Goldar.

Now I’ve gone to advanced screenings for review purposes before, but I doubt I’ll get to see this early. That being said I’ve been pessimistic about this film since the start, so we’ll see what happens.

Update on New Matrix Film – Reboots are the worse. The second worse thing? Prequels. According to several sources, the current word is that Michael B. Jordan’s “Matrix” film will be a prequel, which will see him star as Morpheus. I actually don’t care at all about this franchise. However, a spin off or sequel would do better for the franchise than a prequel.