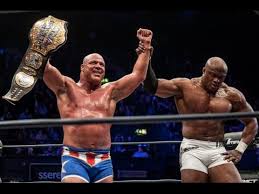 Ey, Space Monkey Mafia. So I just got done reviewing all three Arrowverse shows. I need something that makes more sense to talk about….yet here I am talking about pro wrestling. Fun.

Daniels on ROH Title Win – New Ring of Honor World Champion, Christopher Daniels, spoke to Sports Illustrated’s online outlet Extra Mustard and revealed to them what it was like winning the ROH World Title, saying;

Adam is the first three-time world champion, and he’s never been handed the belt. He earned those championships, and he’s worked for and earned everything he’s had. In the end, he just never had that hunger like I had that hunger for this championship. That drive and fire inside of me was the edge I had in our match.

I’m happy to shed the title of ‘The Best Who Never Held It.’ The way I’m perceived now is forever changed. I’d resigned myself to the idea that I might not get it, and I said I’d be OK with that. Success is gauged by my ability to feed my family and provide, but just to have this title in my hands, I realized I would have been lying to myself—I wouldn’t have been OK if I didn’t win it.

I love Daniels, and I love that he won the belt. I don’t see him holding it forever, but I’d have to imagine he’s leaving SuperCard of Honor with it.

Impact Wrestling’s First Major Tour – After years of shuffling around tour dates, and such, Impact Wrestling is FINALLY going to India four a few days of t.v. tapings. The shows will be in Mumbai on May 30th and May 31st, and will fill the next four weeks with television, leading to their show on July 2nd, Slammiversary XV. The promotion is having talks with sponsors and promotions in India with the idea of launching another India specific brand. This could open as early as late 2017.

Obviously this is huge news, as Dixie Carter survived off of Sony Six’s money for years. To finally fulfill the obligation is huge, but not just that, fans in India are rabid for pro wrestling action. Ring Ka King did fairly well in the area, but wasn’t renewed, but a lot of those talent did well after. In fact, Sonjay Dutt, Mahabli Shera and maybe even some current (but soon to be former?) WWE stars could make up the roster if needed. This also opens up to the idea of finding new talent that might otherwise never be seen. This is a good day for Impact Wrestling.

Luke Haprer Not Happy with Wyatt Family? – Luke Harper just broke out from the Wyatt Family for a second time in his career. Since debuting with the group, the big man has been stuck with the same gimmick, but has managed to win an Intercontinental title since. However his most recent run opened up his eyes as to how he’s viewed, saying;

Nope, don’t miss it at all. I just did an interview recently where I just talked about how frustrating it was to be in The Family, be almost a ‘back-up dancer’ for a strong amount of time. Me and Rowan broke out, and I broke out with the Intercontinental [Championship], but always in a shadow. For a performer like me, that’s hard to take and hard to deal with and I thought that the coming out party of the last six weeks was very eye opening and, ya know, showed me what was out there.

Who’s Inducting Kurt Angle? – Kurt Angle will join Sting as the only men who ever be inducted into the Observer, WWE and Impact Wrestling hall of fames in a few weeks. Inducting him will be the man he helped break into the business, John Cena. Before Angle helped build the SmackDown tag team division in 2002, Angle feuded with green-horn John Cena, who coined the era defining name with his “Ruthless Aggression” slap on Angle. The two feuded off and on for most of the next three years, opposing each other in various pay per view matches as part of SmackDown, before reigniting the feud in 2005 on RAW. This makes sense.

Quick Hitters: Big Show blames Shaq for not taking the WrestleMania match, and calls him “Princess Shaq” in the process. WWE hyping Southpaw Regional Wrestling parody show for Network. Wes Briscoe has been invited to a WWE Tryout. Sami Zayn still doesn’t know where he’ll end up on WrestleMania 33.