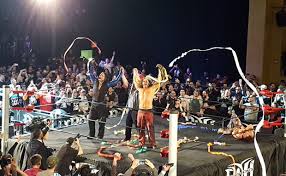 Welcome back Space Monkey Mafia. We’re back where we belong, right here on the site! We’ll be posting stuff on tumblr still going forward, so feel free to go to NerdCorp.tumblr.com and follow us today! Also, Twitter too @NerdCorp. Lets hop on this.

New Hall of Famer – Talk about first ballot guys. Rick Rude should of been inducted years ago. Nay, a decade ago. But today the WWE announced that Rude is finally going in and will be inducted by Ricky “The Dragon” Steamboat.

Hardy’s With ROH? – The Hardy’s popped up this weekend at the Manhattan Mayhem VI event, beating the Young Bucks in a surprise appearance for the ROH World Tag Team titles. In the main event, Bully Ray debuted, attacking Adam Cole and putting him through a table. I believe that either Daniels or Ray will end up winning the ROH World title, and a small contingent of older wrestlers will feud with the Bullet Club. ROH is now relying on more 40 year old or older talent than TNA is currently. Let that irony seep in. Remember when ROH fans would chant “Fat Hardy” at Matt, and would boo Jeff Hardy back in his stint with the company? How fickle the fans are.

Update on Bully-ROH – Bully Ray’s deal is a fairly “long term” deal, at least six months I’m hearing. The deal was in the works for a few weeks, but ROH wasn’t sure if they wanted to commit to the deal, until word got out that Impact Wrestling was also offering Bully Ray a deal. Now, that may of just been Bully spreading some news of his own to jack up his asking price, but who knows.

TNA Back to Spike? – There’s rumors that Spike TV is considering bringing back Impact Wrestling to their network. This is being challenged by two men, who are both reporting the same thing, but are arguing over the details. That’s funny to me. I’m not going to mention their names, but it was pretty hilarious. If you’re hell bent on finding the details, feel free to hit up any popular pro wrestling news site.

Basically, the rumor started from Impact landing on Spike UK, and Spike executive producer Scott Fishman had been backstage a lot, talking to Jarrett. That is literally all we know. Jarrett never talks business details with the media. Never. Getting him to answer questions is like pulling teeth at times (unless it’s about his vision or past events). The man is good for no new news. This applies to people he work with, a major issue guys have teed off on him for in the past, that he doesn’t let many people in. I promise you, only four people know what’s happening, the head of Anthem, Jeremy Borash, Scott D’Amore and Dutch Mantell. None of them are going to be talking either.

Is Impact Wrestling returning to Spike? I doubt it, but then again, they didn’t like Dixie Carter or Vince Russo, and neither are going to be apart of the program going forward.

Best of the Rest – Bobby Roode tolkd SportsKeeda that he doesn’t care about which brand he goes to when he gets called up. Karl Anderson tweets Matt Hardy (that’s news apparently). Konnan allegedly had a confrontation backstage with Impact officials after showing up late. Shaq claims he’ll see Big Show, but doesn’t mention WrestleMania.