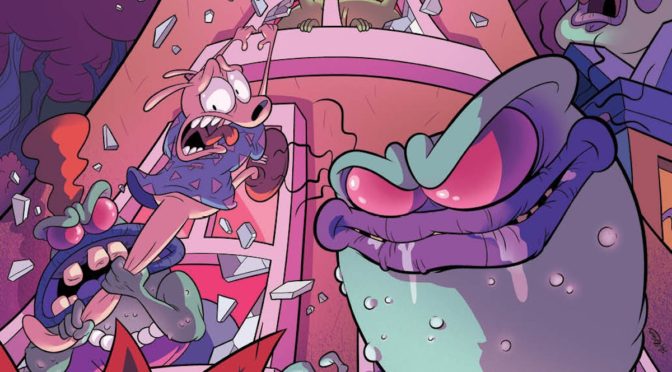 Welcome everybody to the first installment, well more of a reboot of sorts, of a series where I discuss what has captured my interest in the world of comic books. Today we are going to see what happens when modern technology turns people into zombies,   get a different take on a karate tournament, and see what happens next in a popular video game series. We will also wrap up an epic crossover event, catch up with those heroes in a half shell, and witness a not so welcome home party for a samurai.  With so much to cover, let’s not waste anymore time and ask the question I’m sure is on everybody’s mind, What have I been reading?

What do you get when you take a popular show like The Walking Dead, toss in some references to modern technology, and place it in the messed up world of Rocko’s Modern Life? You get a disaster of epic proportions, but in the best way possible.  The art design and illustrations have always been over the top for the nickelodeon show, and their translation into comic book form is a hilarious, yet sometimes frightening sight to behold. The humorous writing is on point here as well, and does a great job of showing the disconnect between different generations and  how modern technology can be beneficial  to some people, while also being severely detrimental to  others. If you are a fan of the series, check this out, it is well worth your time. 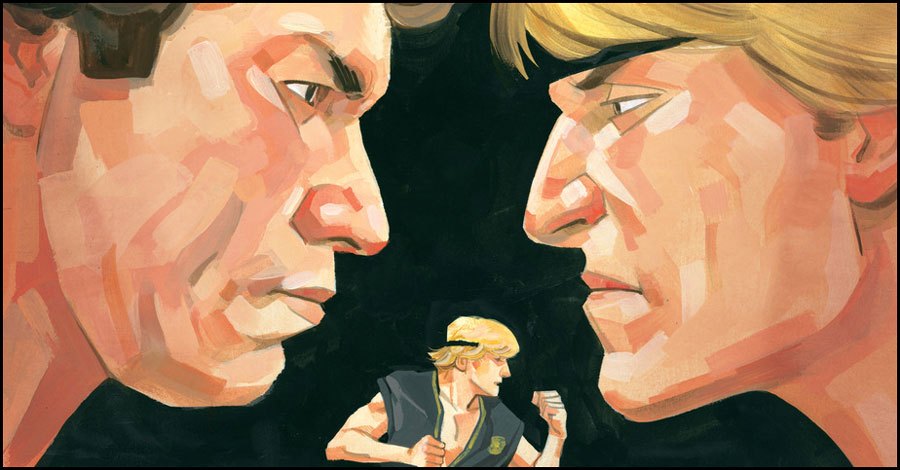 More often than not, when it comes to movies, you tend to only get one side of the story. This series explores what happens to the other guy when everything is said and done, and trust me when I say this, it’s not pretty. That doesn’t mean that the visual presentation isn’t a sight to behold though, because this comic was just brimming with style every time I turned the page. The writing is great too, and really explores just how much a particular character struggled in the aftermath of something he worked so hard to achieve, but in the end failed to do so. If you are a fan of underdog stories, then this is truly something you don’t want to miss. 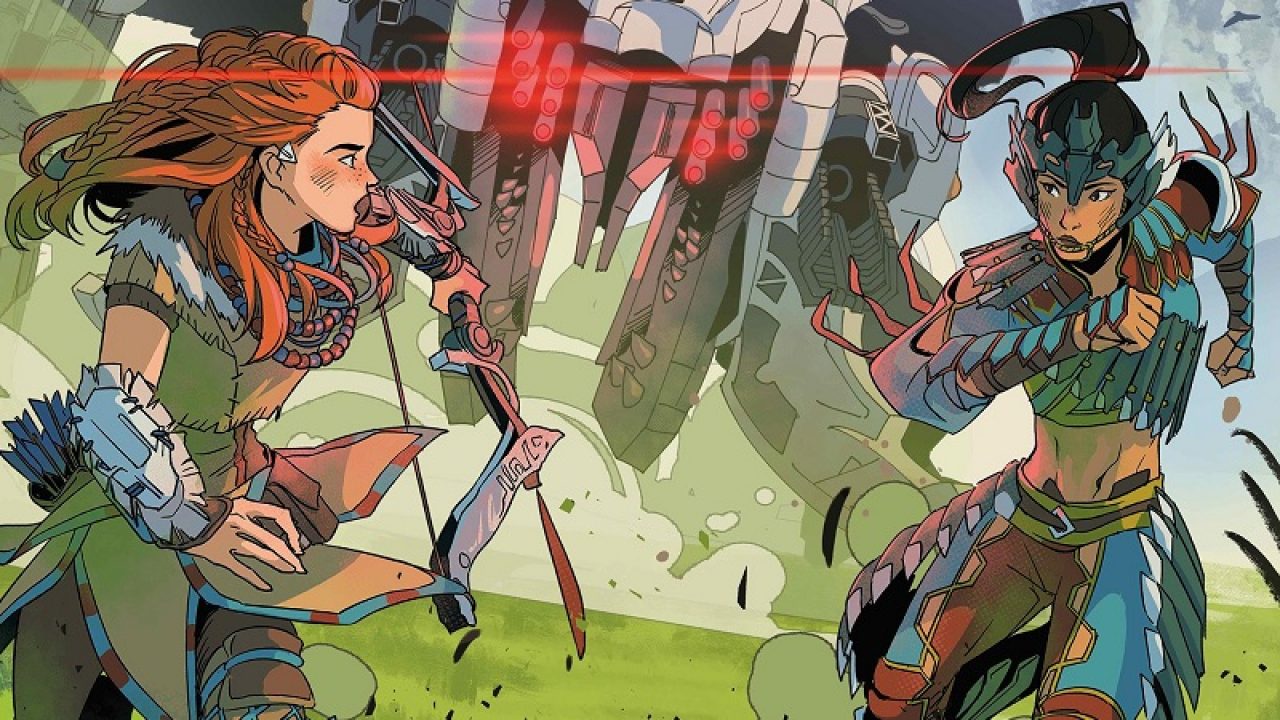 I’m going to level with you here, as much as I claim to know about video games, this is a particular franchise I know very little about. That being said though, there are quite a few things about these couple of issues that are encouraging me to explore the series more in depth in the future. First of all, the setting is intriguing to me, with robots perserving society after it collapses, and then turning on them just as quickly, leaving people to fend for themselves in order to survive. The design of the characters and their world they live in is gorgeous as well. Toss in some solid writing with characters struggling to find their place in the world, and you have something that could turn out to be truly great, if everything stays consistent of course. 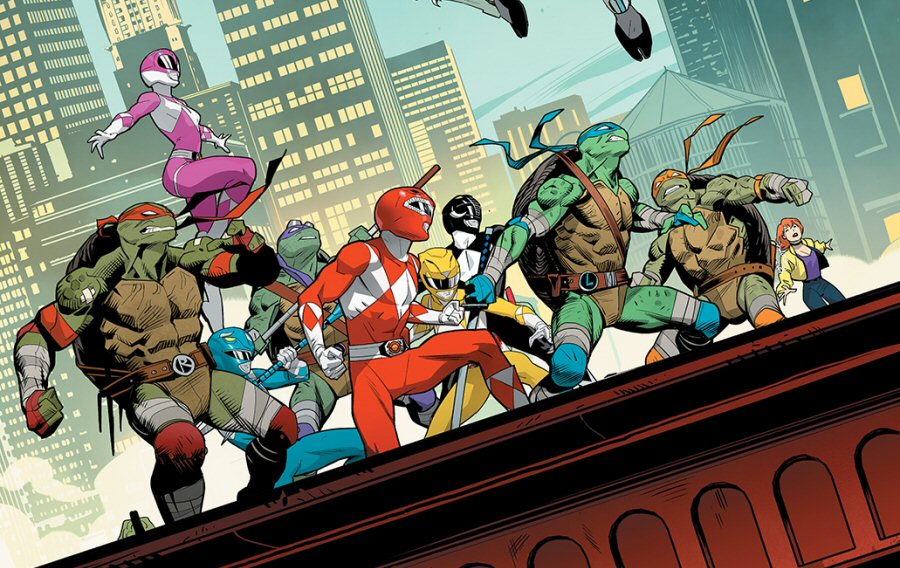 Everything comes to a head in the final issue of one of the strangest crossover stories that I’ve ever read, as far as comic books go anyway. I’ve got to be honest though, despite that epic introduction, what we’re left with in the end is something that feels a bit underwhelming in just about every way imaginable. The illustrations do a great job of bringing the action to life, but sadly that’s where the positives end. The writing throughout the duration of this series was lackluster and cliche to me, and the jokes the writers were trying to pull off didn’t land either. Honestly, if you want a good team up in the TMNT universe, try to find the one where they teamed up with the Ghostbusters, it’s definitely worth checking out, this one however is not.

Our heroes in a half  shell have dealt with a recent tragedy in their lives, and are trying to move on from it in the only way they know how, but for those of you who haven’t read this yet, I won’t spoil it here. All I will say is that it’s handled in a respectful way that shows just how much love and care is given to this franchise each and every time a new issue comes out. I have always enjoyed every aspect of this series, from the writing to the art design, it’s all top notch. If you are a fan of these guys in any way possible, then you owe it to yourself to give the comic book a shot, you will not be disappointed.

Returning home after a long journey should be a time to relax, reflect, and enjoy the company of the people around you. Well apparently everybody who lived in Usagi’s village didn’t get that memo, because he didn’t necessarily get the welcome home party that he was hoping for. When this series transitioned from Dark Horse to IDW, and changed the art style from black and white to color, I was concerned that what made it so special to me would get lost in the shuffle, luckily that’s not the case here. I have always loved how the writer is able to tell a compelling story in such a simplistic way, and the brutal action has been brought to life in a big way with the addition of a full color palette as well. Anybody up for either one of those things should check this out as soon as possible, because it has all of that, and so much more.

As much praise as I just gave to Usagi, my pick for this week goes to Rocko’s Modern Afterlife hands down. It has been a long time since I’ve had a genuine laugh when reading a comic book, and this one gave it to me almost every time I turned the page. Hopefully there are more stories to tell from these characters, because the potential here for spinoffs is through the roof.

That about does it for my first installment of What I’ve Been Reading. Be on the lookout for more adventures in the world of comic books, and be sure to follow me on twitter (link on the site) to get some hints as to what i’ll be covering in the future, see you next time.