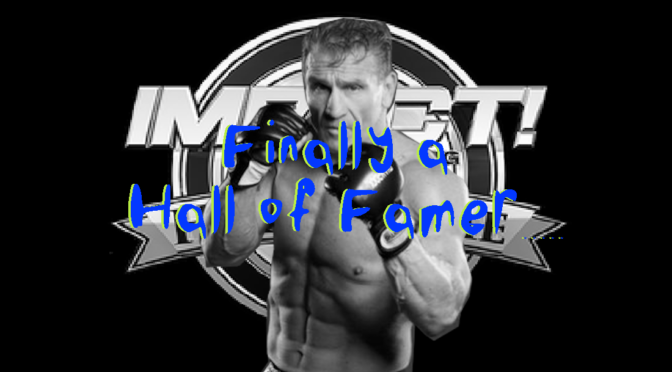 In a few weeks’ time, IMPACT Wrestling will air an episode of their flagship program where they induct Ken Shamrock into their Hall of Fame, becoming the 9th member of the companies prestigious wing. He joins fellow IMPACT Wrestling pioneers Abyss and Jeff Jarrett as members of the early IMPACT days who have been enshrined into the Hall.

In the case of Shamrock, the honor couldn’t have been any later. Shamrock was the original face of the promotion, built around the combat sports icon from the inception. With the popularity of MMA on the rise in 2002, IMPACT (then known as NWA-TNA) hoped to piggyback off of Shamrock’s name value.

He outlasted other veterans in Scott Hall and Jeff Jarrett in 2002 to become the first World Champion of the NWA-TNA era, winning the NWA’ Worlds Championship and doing so against the biggest names NWA-TNA could afford.

After facing off with names like Malice (WCW’s The Wall), Sabu and others, Shamrock left the promotion to go back to the UFC to make money in a big feud with Tito Ortiz. Shamrock came back for a brief period in 2004 but wouldn’t be seen again until 2019 – nearly 15 years later.

Since returning to the world of pro wrestling in his 50’s, Shamrock has shown to have what it takes to go at a nice clip still. Sure, he’s not the uber athlete he was in the late ’90s, and he’s not as mobile as he used to be but he continues to show that age is just a number in pro wrestling.

With names like The Undertaker, Scott Steiner, The Great Muta and L.A. Park still going hard in their 50’s, and pioneers like Terry Funk, Ric Flair and Sting defying father time, someone like Shamrock has all the fans once again believing in him. He’s proven he can keep going even into his older age and with a Hall of Fame induction on the horizon, it’s entirely likely that Shamrock may go into the Hall with a little bit of cold around his waist.

Shamrock is an absolute Hall of Famer, and it’s about time.