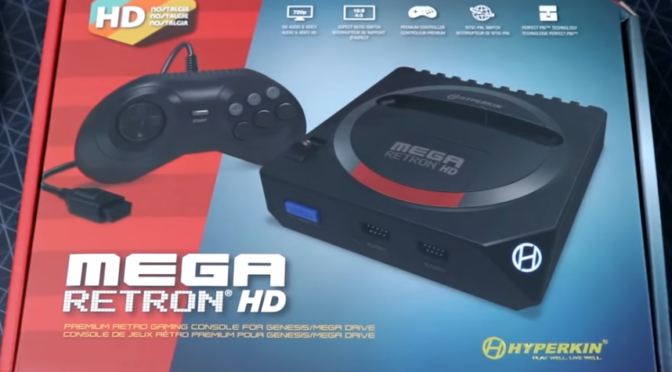 Classic consoles are very hard to play on modern TV’s nowadays, primarily because they weren’t designed to run on them in the first place. In order to rectify this issue, and also, let’s not kid ourselves, make a quick buck in the process, a number of different companies have created what are referred to as clone systems. These are supposed to include modern power cords, HDMI support, and so on. Today we are going to take a look at one for fans of the Genesis, the Mega Retron HD from Hyperkin. Let’s get into it.

What’s in The Box: Mega Retron HD system,  wired controller, HDMI Cable ( a short one, more on that later), USB cable with power adapter  (a power supply for most devices nowadays), and AV cables if you’re looking to connect it to older style TV’s such as a CRT.

Design:  The console itself actually looks like a model 1 genesis to a degree, and has some definite weight to it as well.  The power switch on top is similar to the original system,  and the reset button is on the front near the controller ports. On the back there are the ports for HDMI, AV, Power Supply and an aspect ratio switch for 4:3 and 16:9 displays. Finally, the switch on the bottom allows you to switch between japanese, european, and North American games. The controller included has the 6 button design that was created mainly for fighting games. The overall look is nice and sleek, and definitely nails the retro vibe it’s going for quite well.

Functionality: The sound quality here is spot on, as every game I tried sounds exactly as I remember it, if not a little bit better, but it is a slight bit on the quieter side, so be aware of that. The visual quality is solid too, but the color was a little bit on the dark side for me, so you may want to tweak your TV settings to a game mode if you have one to get the best image possible. All of the buttons on the console are easy to locate and use. The choice to put the reset button on the front took a little bit getting used to though, since the original console had it near the power switch, but it’s not a major issue at all.  The controller included is great too, the buttons are responsive with no input lag from what I could see,  and the extra grip included  makes for an extremely comfortable experience every time you play.  So aside from a few issues here and there, everything looks and sounds, and performs exactly like it should. 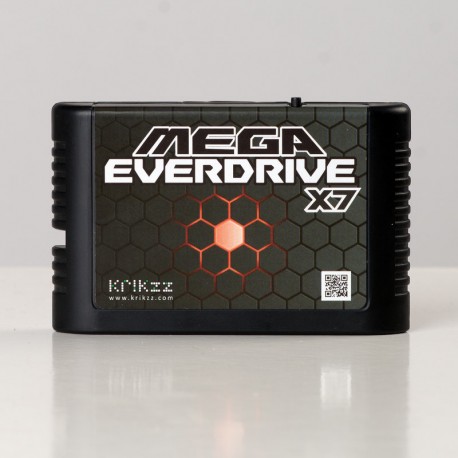 Features: This is where a couple of issues start to creep up for me.  While the option for HDMI output is included, the cable they gave me was too short to connect to the HDTV I have, so unless your power supply and video output ports are all within a short distance of each other,  you may need to find or purchase a longer one to get it to connect  properly. This honestly isn’t a big problem since I’m sure most people have them readily available, it’s just something I wanted to make sure you were all aware of.

Another thing I noticed is that while it’s not advertised as supporting Everdrive carts, the system does allow you to play them, but there is one drawback to this feature. If the cart is not exactly designed like an original Genesis one, the pin connection will be tight, and the cartridge will be hard to insert or remove from the console. Also, anyone looking to use a wireless  bluetooth 8BitDo M30 Genesis Controller with this will have to reset the system in order to get it to work. I’m guessing this is because the system runs off of emulation and not original hardware, but I’m not totally sure.  Now  nothing here  should be a massive issue for most people, but for something that is trying to be a user friendly accessible experience, it sure has a few things  it needs to work on to in order to make that happen.

Reliability: While this is a well built console for the most part, I do see some issues that could occur down the line, primarily when it comes to the Everdrive cartridges I talked about earlier. Constantly inserting and removing them from the system in between gameplay sessions require a lot of force to pull off, which, if you’re not careful, could damage your pin connectors down the line. I would suggest leaving one in if you’re planning on playing the system on a regular basis, but for occasional use, just try to remove them as slowly and carefully as possible to avoid doing any permanent damage.  One more thing, since the console runs off of emulation and not full original hardware, graphical glitches, sound issues, and in-game features may not always work exactly like they should. While none of this has happened to me yet, it doesn’t mean it couldn’t in the future.

Price: For $45 what’s included here isn’t too bad.  If a revision of this ever releases,  Hyperkin should try to include a longer HDMI cable and extra controller, and maybe move the price up to between $50-$60 to match the SNES clone system they currently have on the market to make sure there are equal options available for fans of each console. Not much else to say other than that.

Final Thoughts: The Hyperkin Mega Retron HD is a nice, accessible, and affordable option for those just looking to relive the good old days of the Genesis. Anybody looking for it to be a permanent solution to be able to play all of your games without any issues however may find a problem or two in the future after multiple uses. If you can afford the Analogue Mega SG go for it, as most of these problems are almost nonexistent. If not, then this should work out just fine for now.