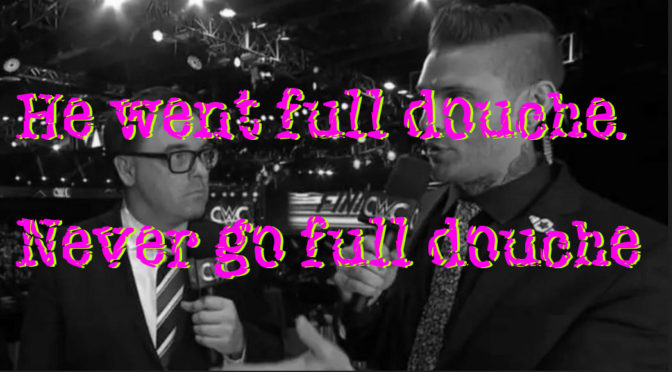 Corey Graves is once again earning the ire of fans because of his dumb comments on Twitter about Mauro Ranallo’s NXT commentary.

Corey Graves is not a good person. At least not that he’s actively going out of his way to prove. On more than one occasion, Graves has needlessly and unnecessarily gone after people on social media for no reason. Sure, some can say “but muh feud“, but what feud? Is he going to un-retire to fight again? No? Then there are no feuds.

No one tunes into televised pro wrestling for commentators to feud. Unless it’s Jesse Venture and Vince McMahon.

This isn’t the first time Graves has gone out of his way to piss people off. Outside of making leud comments about the women on WWE televised, Graves has gone after CM Punk after Punk’s court hearings with the WWE. It could be seen as Graves attempting to sway public opinion against Punk following WWE’s court loss. Considering how pro-big-business Graves has become it would make sense.

The once rebellious Graves is now a puppet for the WWE. So it’s no surprise he’s allowed to do what he wants, including attacking colleagues for no reason. It’s one thing to critique someone in a formal and official capacity but it’s another thing to drag colleagues on Twitter for the whole world to see. That’s exactly what Graves did to Mauro Ranallo.

That’s petty, unprofessional and in bad taste. Then to make matters worse, Graves did the whole “it was not my intention” to insult anyone. That’s a bush league, copout apology and anyone who saw or heard it will agree. An apology that wouldn’t have been made if Ranallo’s agent Frank Shamrock didn’t roll up and demand Graves apologize.

If a Shamrock wants you to apologize, you apologize.

Graves will never learn. He’s a scumbag with good looks, and the ability to kiss the ass of the corporate suits. He’ll always be protected. That doesn’t mean the fans need to accept his douchey behavior. Not every person can act like a 15-year-old on Twitter. Someone remind that to Graves, before the next scandal is felonious in nature.