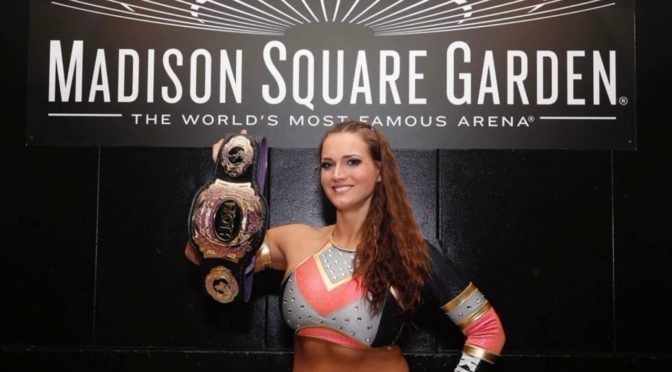 Ring of Honor’s current downfall continues thanks to their epic mishandling of their injured star female wrestler in Kelly Klein.

Ring of Honor has fired their most decorated women’s champion. The news came to Kelly Klein, the aforementioned champion on Tuesday, via an email with Joe Koff. While not terminated in the grand sense, Klein is expected to miss the rest of the year as she deals with post-concussion symptoms, and her deal would expire about the time when she’s allowed to return.

With Klein soon to be a free agent, the sky is the limit for her. There won’t be a reconciliation with ROH with this management, how could there be? They’re accused of mistreating injured talent. They’ve accused of mistreating fans. They’re run by a television corporation that ran a staged propaganda push in order to change the narrative of an election. ROH is garbage.

Assuming Klein’s injuries heal, one has to realize that post-concussion issues can end careers. One of the greatest NHL players of all time, Chris Pronger, suffered from the same issues but his symptoms never really let up; forcing him to retire. Fans everywhere hope that Klein isn’t in the same situation, because Klein is already a top give worker in all of the women’s divisions in North America. She’s polished in the ring, created a unique but timeless look, and wrestles a style that works in the modern era to stand out among the flippy-doo-daa types.

Klein has a ready-made gimmick if she goes into any promotion – save for the WWE. She struts in, declares herself the uncrowned champion, and demands new opposition as the companies “new champion”. It’s easy. It’s breezy. It’s going to work. Where would she go though?

Stardom? While getting an invite to tour with the legendary Joshi promotion is something of an honor, it’s hard to see her going to Japan fulltime when so much of her life, and her husband for that matter, are stateside.

AEW? Her husband, BJ Whitmer, does work as an agent in there. They’re notoriously bad about signing their friends’ wives or husbands, so she’d be on their shortlist of candidates for sure. Yet, they already have a women’s division that is loaded with talent that they can’t get over. Their fourteen deep women’s division is currently favoring only two women in Riho and Britt Baker. They have the most matches, the most wins and the most air time. Don’t expect that to change.

MLW? They have a new and fresh women’s division that Klein would be a perfect fit in but she deserves to test her self against the best and right now the MLW women’s roster is going to be filled with newer names, and that’s not really conducive to the Uncrowned Champion. MLW should have a good division for sure, but it’s brand new and gotta start somewhere.

NWA? Well, save for the alt-management that seems to be running the place, the NWA women’s division is pretty stacked. They have Allysin Kay, Thunder Rosa, Marti Belle and a slew of others. The problem here is that Billy Corgan is a bit of a nutcase. The NWA has already said the YouTube format they’re running is “unsastainable” and there appears to be no new television home coming to save the day. They’re stuck with an hour show, and Klein – while possibly at the top of the card – would be used infrequently.

That leaves us with, IMPACT Wrestling. IMPACT is the perfect place for Klein. She’d be thrust right into a dynamic women’s scene that is constantly evolving and looking for new talent to come in an add something unique to their space. The division is made up of some of the best and heaviest of hitters, namely Tessa Blanchard. A feud with Blanchard and Klein over the Knockouts title would be money for most fans, and the addition of her shoot-style would be a standout idea in a company that has a lot of unique characters.

Where ever Klein ends up next, she’s going to be off in better hands than she was before.