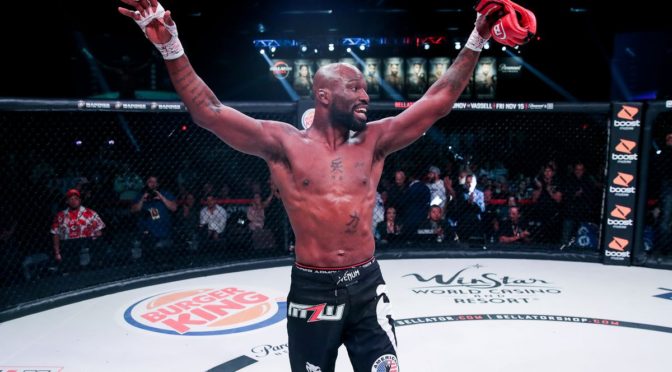 Former Strikeforce middleweight champion King Mo will make his transition into pro wrestling with MLW after a Hall of Fame MMA career.

Muhammed ‘King Mo’ Lawal has agreed to a deal with Major Leauge Wrestling, though the length of time remains unknown. Lawal is a 38-year-old former Strikeforce middleweight champion and winner of the Bellator Summer Series tournament and the Rizin 15 Heavyweight Grand Prix. He’s known for his ability to become a marketable and cross-promotion star without ever going to the UFC and now he’s making his home in Major League Wrestling.

He made his wrestling debut back in 2012 as part of then TNA, now IMPACT Wrestling’s Bound for Glory event. He was the special enforcer for the Bobby Roode/James Storm feud that saw former Beer Money tag team partners fighting it out for bragging rights. The match itself was once penciled for the world title but that was changed when idiots decided to go with Austin Aries as champion instead.

From there, thanks in part to IMPACT being on SpikeTV/Paramount Network, IMPACT and Lawal’s MMA promotion – Bellator – started a working relationship through the network bringing other fighters like Tito Ortiz and Quintin ‘Rampage’ Jackson to the brand as well. Lawal was the only one who would come back, however. He returned in 2014 as Dixie Carter’s bodyguard in a role that didn’t see him do much, and again in 2017 as a member of his real-life fight gym, American Top Team. Team owner Dan Lambard, former IMPACT World Champion Bobby Lashley, current UFC fighter Colby Covington and Lawal all showed up in 2017 as part of an ongoing feud with Lashley and IMPACT wrestler Moose.

He would wrestle his first match with IMPACT at Bound for Glory as part of a tag match, and now over two years later he’s agreed to join MLW as part of their brand. His debut was done on YouTube, in a mock press conference where he claimed he was the ‘Moneyweight’ of MLW and that he wasn’t going to be confined to any one division.

Pro wrestling is in a weird place thanks to the rise of MLW, IMPACT, ROH, the NWA, AEW and other promotions signing North American talent to exclusive deals.  This has caused the industry to look elsewhere for stars. MLW landed someone that probably had a lot of suitors. It was smart. How developed is he as a wrestler though? That’s the question. With IMPACT you have OVW, BCW, and even NOAH to get guys work so they can evolve as a wrestler.

Does MLW have the same resources at their fingertips? Will Lawal be able to make his way to the top of the card like former UFC fighter Tom Lawlor? Only time will tell but for now I’m excited about the move for MLW and Lawal. MLW has hinted at former MMA fighters joining in the past and now it looks like Lawal is the next in line of what could be many for the New Rochelle-based promotion.