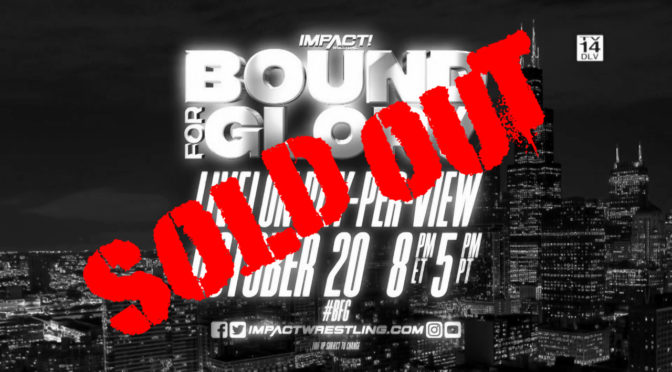 An estimate of over 2,500 are now expected in the Odeum Expo Center in Villa Park, Illinois after yesterday’s sellout announcement.  For the first time in years, a Bound for Glory is listed as ‘sold out’ and this was after IMPACT Wrestling apparently opened up several sets of seats in the weeks prior.

With just under two weeks away IMPACT is sitting pretty. Their card is all but set, with only one spot still open in their X-Division ladder match as of this writing.  They have had a steady supply of outside influencers stepping into the ring in the form of MMA legends Ken 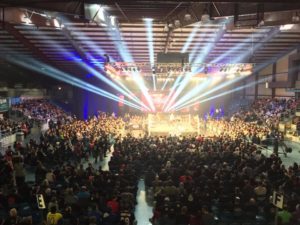 Shamrock, Frank Trigg and Stephan Bonnar, which no doubt helped out.  Not too mention a strong main event between Brian Cage and Sami Callihan that is stepped in a great blood feud.

If the sellout claim is real then they’ll have matched ROH Wrestling’s sellout of the same venue in 2017 with Kenny Omega headlining.  That isn’t nothing.  Considering they’ve been playing to crowds of about a thousand or so in various small venues, it really does feel like IMPACT is resetting to the 2005-2006 years.  A time when small increases were heralded as huge accomplishments and a roster of mostly homegrown stars were the backbone of the promotion.  Granted back in 2006, Bound for Glory sold out the 3,500 seat Compuware Sports Arena outisde of Detroit, Michigan.  It’s entirely possible IMPACT could’ve done the same thing in a bigger venue this year, but who knows?

We’re in those days again.  Is AXS TV as big or as profitable as the old Spike TV/ new Paramount Network?  No, obviously not.  Yet, they have a bigger social media presence than ever before, and are routinely doing solid numbers on Twitch and YouTube.  Together, with smart signings, clever partnerships and now a platform that they have control over (AXS TV), they’re in position to truly take a seat again with the big boys.

While AEW and WWE are on their own levels, it’s clear IMPACT is right there with ROH and the NWA for 3rd.  They’re more profitable than the NWA, and are drawing better crowds and pay per view numbers than ROH.  If they can partner with a few major feds, say NJPW or NOAH, and maybe another North American promotion and bring them to AXS t.v., the synergy would be unmatched .

AXS would also be wise to look at bringing in MMA again, maybe in the form of a deal with Bellator for a Kickboxing series, and do a lot of cross promotion with them.  Perhaps even RIZIN, whom the aforementioned Frank Trigg is a broadcaster for.  In a world of no high end free agents, creating cross-platform buzz is the next best thing and bringing in guys from other sports has always generated interest.  Hell, Shamrock’s return to IMPACT at the age of 55 is a huge reason why IMPACT has sold out the Odeum.

The next step though is to deliver.  You’ve got the arena packed, now it’s time to blow the roof off of it.  Show the world what you’re about and they’ll come back with more.  Just keep executing.  That’s how you rebuild a brand.