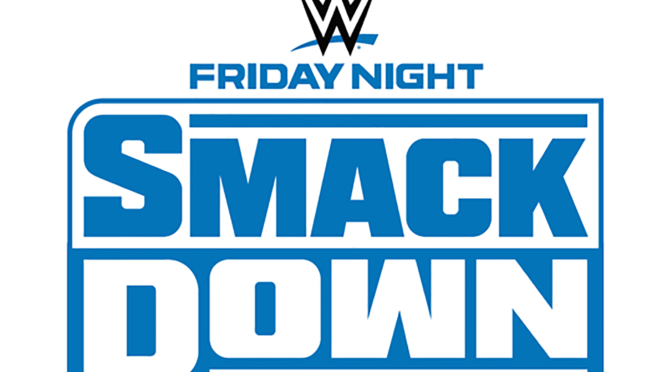 10) John Bradshaw Layfield
– JBL makes the list mostly because of his promos and commentary. 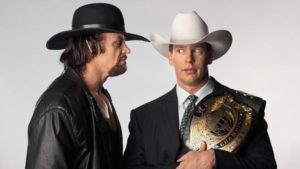 His run on the blue-brand was marked with a United States championship run or two, as well as the WWE Championship he won in 2004.  Sure it came against Eddie Guerrero and a lot of fans weren’t having it then, but he had a solid run.  A lot of great promos, even if his matches weren’t that great.  I mean you can only do so much against Big Show.

9) John Cena
– Despite only being on the brand for three years before being moved to RAW for a majority of his WWE career, Cena’s run on 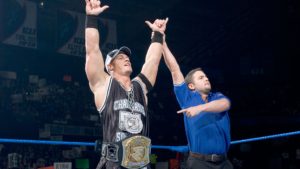 SmackDown was necessary.   Not only did it give WWE it’s newest franchise star, but while RAW floundered from 2003-2004, Cena’s skits on SmackDown were appointment t.v.  From his Vanilla Ice costume on Halloween in 2002, to his first feud with Brock Lesnar in 2003 and his “stabbing” in 2004.  Cena always managed to deliver some iconic moments on SmackDown.

8)  Brock Lesnar
– Brock Lesnar is in the same situation as John Cena, the only difference is why they were appointment t.v..  For Cena it was his 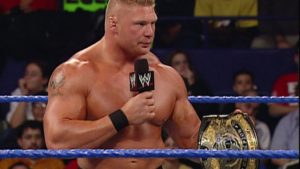 promos and antics, for Lesnar is was his wrestling.  This may strike some fans as peculiar or even a lie, but there was once a time where Brock Lesnar was arguably the best wrestler on the WWE roster.  His matches were big deals, and filled with physicality and brutality that had fans tuning in.  The sixty-minute Iron Man match with Kurt Angle in 2003, his Hell in a Cell bout against The Undertaker in 2002, and of course his bout with Eddie Guerrero in 2004.  Lesnar always found a way to deliver.

7) Jeff Hardy
– Unlike most of this list, Jeff Hardy isn’t on here because he helped launch or stabilize the show.  Hardy didn’t really take the reigns until about seven years into the show’s history, where he won his first

World Championship, defeating Edge and Triple H in a triple threat.  His first run wouldn’t be long, but he’d win the World Championship months later and enter into a career defining feud with CM Punk.  Hardy’s wrestled before after that run on the Blue Brand, but it was that legendary feud with Punk that makes Hardy a worthwhile Blue Brander.

6) CM Punk
– Like Hardy above, Punk had a decent run prior and after his 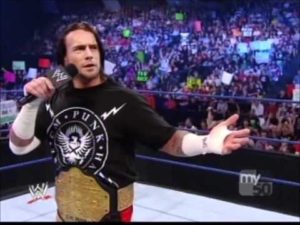 summer-time feud with Jeff Hardy but that run was so iconic that it propelled Punk to the top of the industry.  Sure he held tag titles with Kofi Kingston and he did the whole Straight Edged Society but that was a bit of an underwhelming mess.  That feud, and subsequent impersonation of Hardy on SmackDown left fans knowing they watched something great.

5) The Undertaker
– This might get me some trash from fans for having him so low but let’s be honest, The Undertaker only had a few years of a viable 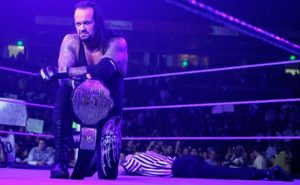 centerpiece.  Especially when you realize he spent most of 2006/2007 jobbing to The Great Khali.  ‘Taker had a bunch of World Championship and WWE runs, as well as legendary feuds with Brock Lesnar, Vince McMahon, Kurt Angle, and Kane.  He’s not any higher though, mostly because of the latter half of his SmackDown run being so dang awful.  That being said, he’s 5th out of a few possible-thousand.  It’s pretty impressive.

4) Los Guerreros
– This will make some people pause but I’m asking you to hear me out.  Firstly, as a tag team they were the stabilizing unit for the tag titles on the brand, after they debuted.  For nearly two years Eddie 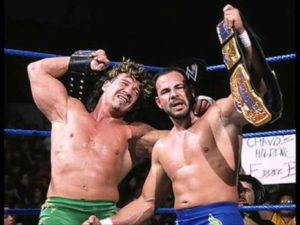 and his nephew Chavo were the centerpiece of a new tag team division.  People talk about the SmackDown-Six all the time, but only Eddie and Chavo who lasted more than a few months as a tag team.  Eddie then had a few good singles runs, with that win over Lesnar and eventually Kurt Angle being his biggest victories.  Chavo though shouldn’t be ignored, as he was the Ace of the Cruiserweights from 2004 to 2007.  Sure he took a backseat to Shane Helms for a year but he’s 3rd all time in Cruiserweight Title wins, and days held.  Four of those six reigns happened on SmackDown.  Respect where it’s due.

3) Batista
– Batista debuted as a deacon but came back as a world champion.  He brought the World Championship over to SmackDown from RAW in 2005, and feuded with JBL in one of the more impressive bouts of JBL’s career.  He ended up getting hurt but (and I stand by

this statement to this day), gave The Undertaker not just his greatest feud ever, but his greatest Wrestlemania match ever.  Batista would hold the belt a few more times before heading to RAW and eventually retirement but he solidified SmackDown after Cena left and the unfortunate passing of Eddie Guerrero. 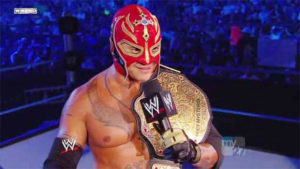 performance.  He won multiple Cruiserweight Chapmionships, mid card titles, World Tag Team titles and even a few World Championships.  He formed iconic tag teams with Edge, Eddie Guerrero and Rob Van Dam, while feuding with Kurt Angle, Randy Orton, Chris Jericho and CM Punk.  He had the longest sustained run by anyone on this roster, and it’s clear that his impact helped keep SmackDown viable.

1) Kurt Angle
– But if we’re talking the greatest SmackDown wrestler of all time, it’s Kurt Angle as far as I’m concerned. Angle was the biggest SmackDown star the minute the brands got split.  He not only had the best matches for four years on the brand but he had the best 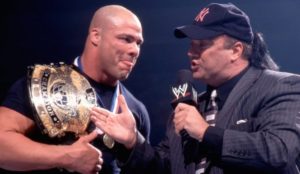 skits too.  Hell, if you want to even go back prior to the brand split, who’s the guy making the best segments and matches?  Angle.  His feuds with Undertaker, Rey Mysterio, Randy Orton, Big Show, Chris Benoit, and so others were the reason why SmackDown survived and thrived under the brand split.  Without Angle, the reputation and identity of SmackDown being the “worker” brand would never of materialized and without that, would SmackDown of ever been able to hang on?