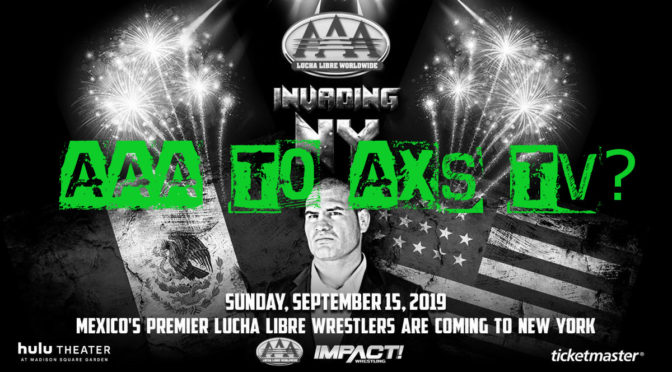 This could be a bigger story than anyone realizes right now.  AXS is now the home for IMPACT Wrestling.  The show will begin airing most likely on Thursday’s starting after Bound for Glory.  The network as many of you already know, air a highlight version of NJPW and Women of Wrestling.  Now, they’re getting a cousin.

Just announced by AXS, the network will in fact air the AAA Lucha Invades New York event that just happened this past Sunday.   It’s expected the full show will air in it’s entirety on September 20th, at 8 p.m. EST.  This is just  five days after it aired on Fite.TV.

Firstly, this will more than likely rub the Fite.TV folks the wrong way.  Yes, IMPACT has a working relationship with them, but undercutting video-on-demand numbers can’t be a good thing for Fite.  Hell, maybe Fite is cool with this, or even suggested this.  Who knows?  The show was a huge success in regards to attendance, selling out all available seating we’re told, so why not bank on future buys?

Secondly, this might rub New Japan Pro Wrestling the wrong way.  NJPW is currently partnered up with CMLL.  CMLL and AAA HATE each other.  While I have a hard time imagining that CMLL would pressure NJPW into cutting ties, the whole thing can’t be viewed as a “good” thing for the NJPW/CMLL relationship.

Despite potential issues with partners it looks like AAA will be airing on AXS with more regularity.  This makes sense due to IMPACT’s partnership with them for a lot of years.  They routinely do tours of Mexico now a days, and talent-swap with AAA for shows.  So I wouldn’t at all be surprised if AXS started doing a similar weekly show for AAA the way they do for NJPW.  Which is essentially cherry picking matches from the week or past weeks, and providing commentary over them.

This isn’t just a special for AXS, this very well could be a glimpse into the future.