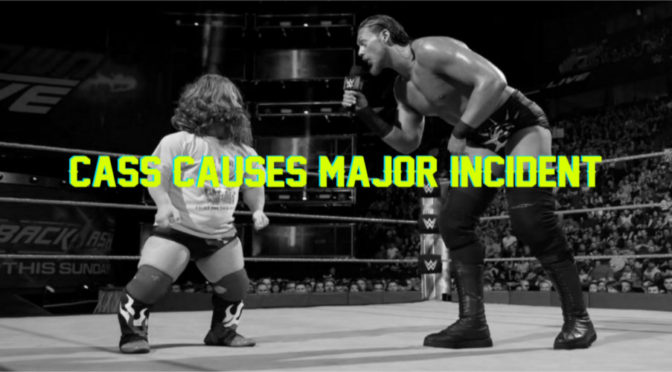 Big Cass, aka Cass XL was at last night’s WrestlePro event and apparently caused an incident with WrestlePro’s owner Pat Buck.  The night was built around Buck, who was turning over operational duties to former IMPACT Wrestling star KM.  KM was taking over because Buck had been hired by the WWE to be a producer for the company and last night was Buck’s last match for WrestlePro; at least in the immediate.

Cass and Buck got into a confrontation but not before Cass started acting erratically in the talent locker room.  Earlier in the night Cass would get into a confrontation with Joey Janela, probably having something to do with Enzo – Cass’ partner – and Janela’s fight from earlier this summer.  KM intervened at this point, calming things momentarily, but Cass’ behavior was so bad, and escalated so quickly that indy legend Dan Maff threatened to handle Cass himself if management didn’t intervene.

Eventually things picked up, because after accusing everyone he could seemingly find about stealing a sweater of his, Cass approached Buck himself, who was apparently working over his main event match with the members of SCU.  After Cass got heated with Buck and spat in his face, Buck felt the need to defend himself and laid out Cass with a single punch.

The part of this story that starts to frame the conversation comes next; when Cass wondered aloud after getting punched why he in fact was put on his ass.  When you realize his behavior was erratic and Cass having short term cognitive troubles, it’s very easy to see that Cass was having some sort of episode.

This is pretty obvious even before you realize that the police would later take Cass to the hospital for evaluation of his mental state.

PWInsider and Voices of Wrestling broke the story, with Voices of Wrestling being behind a paywall.  PWInsider goes into a bit more detail, but at the end of the day the headline is really all we need to know about this incident.  Be it some time of fugue state, bi-polar disorder, schizophrenia or just plain ol’ addiction issues, it’s clear that Cass has a bigger monkey on his shoulders than I think anyone knew.

I have my own theories but they’re nothing more than that, theories.  I’ve seen this behavior before and I know that this isn’t normal behavior.  It’s something that needs to be addressed because it will get worse.  This is incredibly sad news for Cass, who was in the middle of reviving his career.  I think I speak for everyone when I say that I hope Cass is able to get his issues under control and he can return to the industry.

For those that doubt the story happened, KM himself on Twitter acknowledged an incident.

While everyone else focuses on the one bad thing I’ll focus on the countless good things that happened! This show was fn AWESOME! Everyone kicked ass and I couldn’t be more proud of our locker room. All the matches delivered. Tonight was truly special. Thank you to all who came!

Besides this moment in time, Saturday was a really well received night for wrestling.  Josh Barnett’s 2nd Bloodsport event went off well, IMPACT had a strong showing with Victory Road, WrestlePro sent off their founder and I’m sure so much more that we have no idea about yet.  That’s what I’ll choose to remember about yesterday.