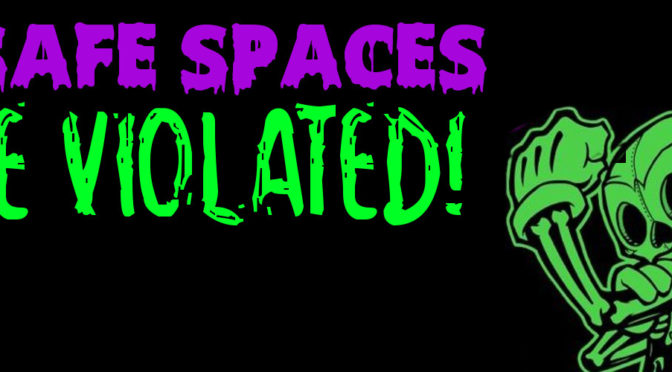 Sunday night there was a wrestling show.  People put on matches, simulated combat was engaged in, and bodies have a few less days on their lives than they did prior to the night beginning.

And then an apology was issued.

Not an apology for the simulated acts of violence and combat, no, fans signed up for that.  Yet an apology was issued anyway.  Why? Because someone’s safe-space was violated.

I wish I were lying, but that’s the case for Bizarro Lucha, who issued a three tweet-statement on Labor Day in the states (September 2nd).  In the statement, Bizarro Lucha relayed a story of a singular attendee being upset with the language the two competitors used in the main event of their show.

Their poor Frosty heart was melted by words, but the violence and years taken from their lives didn’t bother them at all.

We are a work in progress.

We do our absolute BEST to make sure every performer on the Bizarro roster is aware that this is a safe space for everyone.

Progress can only be made through awareness and hard work over time.

Last night, a fan felt uncomfortable with words shared between 2 performers during the main event.

This was brought to our attention and every step has been made to remedy the situation.

Thank YOU for keeping everyone accountable.

Our fans are family.

Please continue to keep us moving in the most foreward and inclusive way that we can by bringing anything to our attention that may offend or need educated upon.

Wrestling is for everyone.

Bizarro is for everyone.

Now, it’s entirely possible that some real, racist, brutal, disgusting and degrading language was used.  Yet…when we reached out for

clarification on what was said, we heard nothing back.  Let’s be fair, they’re swamped clearly.  With their…one comment.

Now this is being written on Wednesday the 4th of September, at about 3:30 in the morning, with a post time of Thursday in the afternoon.  If between now and then we get a comment back about the “incident”, we’ll update and possibly remove the snark from the column.

This is simulated combat.  If words like “bitch” or “fucker” offend you, you’re offended at the wrong thing.  This is like the nightly news telling you Grand Theft Auto dehumanizes teens, yet then air hours and hours of graphic video and stories of bad people doing bad things.

What’s really the issue here?  it’s not the language.  To the person who felt the need to complain to the event that their safe space wasn’t safe enough; boobs.

That’ll offend someone I’m sure.