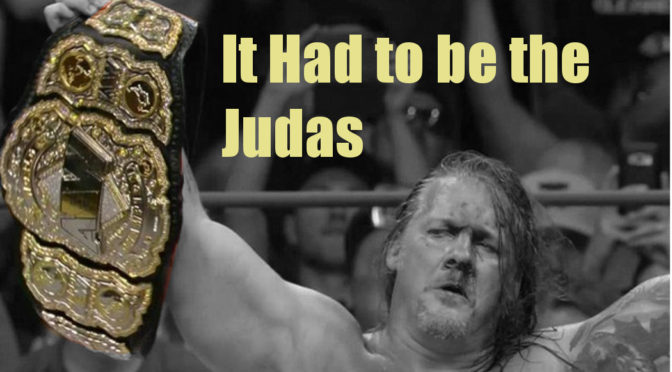 The dust has settled, the fans have gone home and a Smiling girl has gotten her release.  A soft echo can be heard in the Sears Centre as the janitorial staff sweep up after a night of car crash wrestling, and blown spots.

The show was met with overwhelmingly positive reviews, but the degree of which varies.  Bodies were broken, flesh torn, and hopes dashed in an instant.  That was the night for All Elite Wreslting’s Magnum Opus before their debut on TNT in October.  The final night to prove to a perspective TV audience that they’re worth you’re time.

It was a night that introduced the AEW audience to the former LAX and more than likely the current EYFBO (Santana and Ortiz of IMPACT fame).  It was a night that limped forward without Jon Moxley, as PAC (Pack? Pock? Puck?) had a match that received…split…reviews online and Best Bust Machine Kenny Omega.  A night that saw two women’s matches, yet it was the female referee in the main event that seemingly got the best rub.

It was a night of chaos, turmoil and uncertainty.   Gone is the absolute assurance that Hangman Page is the future.  The Dark Order are as over as sand on a beach at sea level.  Then there’s the “what could of been…” moment when it was announced that top women’s prospect “Smiley” Kylie Rae would no longer be with the company.

It was a night that relied on the SIXTH televised encounter between two sets of brothers.  A night that a jobber was given a marque match against Cody Rhodes, essentially wasting his match.  A night that  no matter how hard anyone tried on commentary to convince us otherwise, Shawn Spears did not deserve that slot.   A night where a wrestler, who’s entire gimmick is that he doesn’t care about anything, got the loudest ovation of the night.  A night where the 2nd loudest was to a 60-something, overweight Arn Anderson.

Chris Jericho won the AEW World Championship before the fans left the arena, before the janitors started sweeping and before the ring crew started pulling apart the nightly canvas.  Jericho left the ring with the belt, and at 50 with only dimples left resembling abs on his bloated stomach, carried the piece of gold on his worn down shoulders, as his strained back will be asked to carry a company one more time.

He’s slower than he used to be.  The dye in his hair doesn’t cover the grey that well.  His physique is all but gone and his athleticism is a funny joke that the younger guys tell tall tails about.  He’s a shell of his former shelf, and has been for a long time.  No matter how much some fans, pundits and journalists will proclaim otherwise; Jericho is done as a top level worker and has been for years.

So why did AEW put their biggest belt, their most vaunted prize and the key to the whole company on him?  Because he’s reliable. Say what you will about the busted work horse, but Jericho has aged well.  Not in his physique, or his athleticism, or even musically.  No, he’s aged well with the wrestling audience.  A staple of the Monday Night Wars, and a bright spot in the WWE for the decade to follow.  In a time when no one was doing anything, Jericho got the terms “Stupid Idiot” and “You Just Made the List” over like free food.

Jericho’s name brand, not his body or look, has aged well.  He’s stayed true to the fans by never pandering to them. He changed up his look (and continues to do so), his character and his gimmicks.  He brought in a useless back elbow that no one liked, and got it buried into our minds that if he hits this weak ass elbow that the match will be over.  Having all of the quickness of a drunk Scott Hall trying to throw a discus punch, Jericho was able to bring the fans out of their seats at the end of the bout with that terrible elbow.

Because the fans have been rewarded with consistency from Jericho, so they give that respect back to him.  If Jericho said his left pinky toe could end a match, fans would accept this.  They look past his mediocre matches (at best) and accept over the top praise as fact, like when color commentator Golden Boy called Jericho the “Greatest of all Time”.  (Kurt Angle would like a word)

They believe in him and they are rewarded.  Which is why when the heads of a company do the most Triple H thing possible and book themselves in the 3rd and 2nd top matches against a jobber and the same team they’ve already fought five times in four months, you put the belt on what fans accept.  You put the belt on the man that the fans trust, because whether you admit it or not yet, fans don’t trust the AEW Vice-Presidents.

Their highest paid wrestler has a losing record, their women’s championship match is a tent pole for a debate on gender in sports, and their most celebrated woman by those on commentary was a referee.  Yes, fans should worry about AEW.  Fans should worry about Cody, Brandi Rhodes, The Young Buck sand Kenny Omega being the ones who are running things.

No, you shouldn’t worry about the champion though.  Jericho is not the wrestler he once was, and it’s not even close.  Yet, what Jericho brings to the table is the ability to adapt.  To change to fit the plan, not change the plan to fit him.  He’s reliable because he’s always changing.  Fans expect Jericho to do things that aren’t the norm for himself.  He has consistency in his inconsistency.

He’s a proven commodity in a promotion that has a few, but none that are used as well.  Yes, Jericho as champion was the right move on a night full of wrong ones.  Which is why he’s the right fit for the role as champion.  The company will hopefully figure out what works and what doesn’t and catering to the smallest fragment of an already niche fanbase isn’t going to net the results you want.  Until the eighty-four Vice Presidents figure that out, AEW will go through some growing pains.

Who better to have at the top of a card full of pains, than the one man who fans refuse to admit isn’t good enough anymore to be at the top?   What’s more AEW than that?