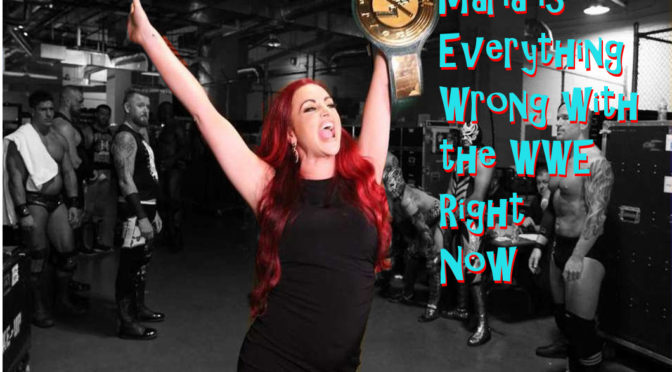 The WWE made the inexplicable move of putting the WWE 24/7 Championship on Maria Kanellis.  Why?  To showcase her as the first ever pregnant champion in pro wrestling history.  An honor no one was vying for.

The WWE is pushing Kanellis’ win as something serious, something to be respected and commended.  Kanellis her self on Twitter has done the same thing, actively celebrating a win that no one buys.

This is all happening in the midst of a domestic violence angle that the WWE is running, where Maria humiliates, degrades and abuses her real-life husband Mike Bennett.  The angle has drawn many detractors on social media and has prompted Maria to speak out on Twitter herself, decrying that she wasn’t forced into the angle.

The entire angle exemplifies the pathetic story telling of the WWE in modern times.  With the rise of New Japan Pro Wrestling in the states, IMPACT, MLW and now AEW offering more contemporary and realistic angles, the WWE’s antiquated idea of “getting heat at all costs” no longer works.

Maria’s title win isn’t just an embarrassment for her and the title but for the industry at large.  We’re supposed to buy the idea that this is an athletic contest, this is a promotion that’s routinely featured on the ESPN family of outlets.  Yet, I’m supposed to believe a pregnant woman can win a title?  Spoiler alert; they can’t.

Either they’d get hurt in the actual competition, or they’d risk their child.  Now, to Maria’s credit she’s done nothing in earnest to put her unborn baby in any harms way.  She didn’t even lay down to pin her husband, instead just digging a heel into his chest.  So Maria’s a good mom, no doubt.  The idea though that she could compete as a pregnant champion is the joke.

No one believes Maria can do anything as champion, which is why beyond just the realm of kayfabe fans are hating this angle.  What can Maria do as a character when she’s legitimately pregnant?  She can’t get rolled up, she can’t take a bump.  She can’t do anything that her profession dictates she does as a worker, whilst pregnant.

The WWE continues to spit on their fanbase with these types of decisions.  If they presented their product as something to be taken seriously, fans would take them seriously.  If they booked things logically, instead of to whatever fetish Vince McMahon has that week, then their fanbase would be growing, not shrinking.

Maria’s title win in itself is a joke, and is the biggest example of the WWE just not getting it anymore.  It’s a fucking travesty to see the WWE building a pregnant champion and domestic angle storyline into one, while propping the comedy championship up against it.  It’s pathetic, it’s sad and it’s fucking disgusting.

There are moments in peoples careers that define their legacy, and becomes something they can never escape.  For Maria and Mike, this is there’s.  They’ll forever be known as the couple that normalized domestic violence against men, while ruining the idea of championships in the WWE.  Congrats guys, hope it was worth it.