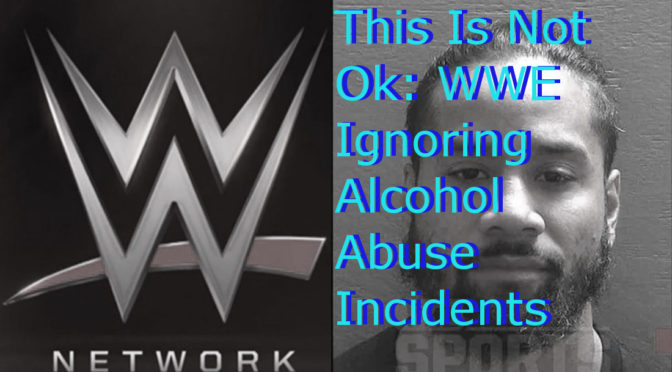 In the world of the WWE, Jimmy Uso is once again under arrest for driving intoxicated.  This time he got pulled over in Florida.  This is the second time this year that he’s been arrested on alcohol related charges.

The WWE for their part are not sending him to rehab nor are they going to seemingly punish him for this.  The WWE continues to ignore the problem of alcohol in not just their company but the U.S. by and large by not making this a bigger deal.  If the WWE told Jimmy Uso “rehab for 90 days or GFTO”, people everywhere would see this as a move by the company to curb social alcoholism.

When you make the decision to drink, and then feel you can drive; you probably have a problem.  Drunk drivers are not people you can just excuse with “oh, they had one too many”.  No, they knowingly made a choice to drive to a bar, knowingly made choices to drink at the bar, and then – be it drunkenly or not – knowingly made the choice to drive.  This is like when someone cheats and they go “OH I JUST MADE A MISTAKE”, no ,bitch, you made a few dozen mistakes in the matter of minutes.

Alcohol consumption in this country is glorified and it shouldn’t be.  Jimmy Uso could have easily killed someone all because of his arrogant and selfish behavior.  If you’re going to a bar in 2019 and you don’t use an Uber or Lyft, what you’re saying is that your good time is more important than being responsible.

If I’m the WWE, I’m firing Jimmy Uso today but I’m not.  It’s time that Jimmy Uso accepted on simple fact; sober and responsible drinkers don’t get arrested on alcohol related charges.  They certainly don’t get arrested twice in one year for the same issue.  You know who does?