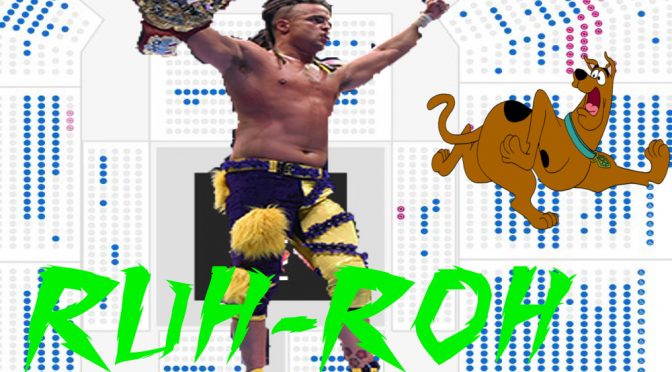 This is about two weeks old but for some reason really didn’t grasp on with the internet wrestling community outside of Reddit.  News is though, according to the man himself, Juice Robinson is done working with Ring of Honor Wrestling going forward.

Robinson debuted with the promotion this year as part of a talent trade with New Japan Pro Wrestling, and was immediately assigned the Lifeblood stable, a group that made no sense, made up of wrestlers with seemingly no similarities.

The lack of widespread awareness for this comes form the fact that the podcast that revealed this news is the Voices of Wrestling podcast, which is held behind a pay-wall for Patreon subscribers.  The word, according to Voices of Wrestling, is that Juice was unhappy with the booking of the promotion and by the looks of how things are going lately with the brand, no one should be surprised.

The fact is that ROH is in 4th right now in the States.  They’re running shows with an nonathletic, unimpressive world champion in Matt Taven, and it looks very clear to anyone paying attention that they’re only going to book anyone strong that is under a long term deal with the brand.

Every year around the holiday/new year season, oodles and oodles of expiring talent bolt for greener pastures.  In the last three years they’ve lots Moose, Mike and Maria Bennett, Adam Cole, Kyle O’Reily, Bobby Fish, Roderick Strong, Keith Lee, Adam Page, Cody Rhodes, the Young Bucks and others.  Backstage members like Kevin Kelly and ROH mainstay BJ Whitmer also fled.  A once mighty roster is being carried by a handful of guys and the talent they do have is only really there do to partnership programs with CMLL and NJPW.

Take away those two pairings and ROH would only really have Jay Lethal as a star and Shane Taylor as a prospect and they’re about the same age.  Hell, thanks to the NWA, they still have some talent in Nick Aldis, Colt Cabana and now Eli Drake (more on him in another column).  Is that going to be their plan though?  Survive on secondary contracts with talent who wrestle predominantly elsewhere?

Someone like Juice should’ve came in with a rocket strapped to his ass.  He’s charismatic, unique and uber talented.  He could do anything you wanted or needed.  Yet, you stick him in a generic faction with a bunch of D-level names?  Mark Haskins is your big get to pair with Juice?

No wonder no one went to their biggest shows of the year tonight.  Juice deserved better and so do the ROH faithful.  There are again talks of NJPW looking to end their partnership with ROH sooner rather than later, as NJPW talent are the biggest reason ROH drew any type of house.  When the Elite were in ROH the company had it’s own stars.  Now they’re in All Elite Wrestling and it’s beyond obvious that their departure has drastically affected ROH. 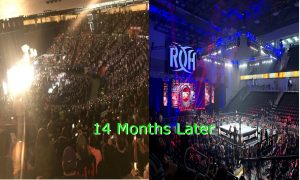 This is what mismanagement can cause for any promotion or sports outfit.  You can’t survive by making mistakes constantly and ROH has been making them over and over.  It’s different than IMPACT, who has suffered from management and owner turnover.  ROH hasn’t had that same turnover. They’ve had the same management group in place for nearly a decade.

That seems to be the problem.  I’m not saying Juice Robinson would’ve saved Best in the World’s attendance.  He would’ve helped though.  If he, and not Matt Taven, were World Champ today, people would be far more interested in ROH’s product overall.  Taven has proven that he’s nothing more than ROH’s Jay White.  A guy that they’re pushing for other reasons than “he’s a draw”.

Booking wrestling isn’t hard.  I don’t know why so many promotions pretend it is.