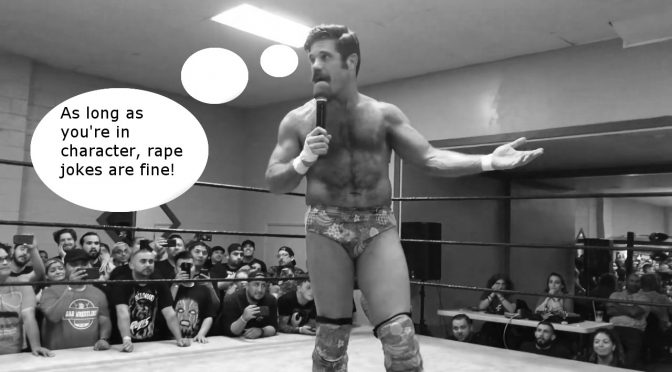 Joey Ryan doesn’t get let off the hook that easy.  It’s a total and unbelievable cop-out that Ryan is going with the “IT WAS ALL PART

OF THE ACT” defense for the unbelievable things he tweeted.  Here’s the thing though; that doesn’t justify or excuse his behavior.  In fact, if anything, it makes it even worse.

To purposefully try to stoke genuine resentment through jokes about rape, and child molesting?  Who does that?   Who thinks 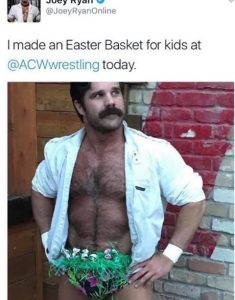 “that’s a good way to get noticed!” No one.  No one sane, anyway.  Let’s not split hairs here people, he’s made plenty of rape jokes.  He’s made a joke about children performing sex acts on him, though that one is implied.  He’s made jokes about domestic violence, sexually harassing women, and even mocked and ridiculed Taeler Hendrix on Twitter, during one of IMPACT Wrestling’s most watched time-periods.  Made even worse when you realize THEY WERE WORKING TOGETHER.  Now they did work together after the fact, but who’s to say the whole ordeal was a work?  Who’s to say that there wasn’t some apologizing that had to be done after?  I’m not sure.

Joey Ryan and his camp are claiming the things he’s tweeted about were just him “in character” and to not take it seriously,and that anyone holding him responsible is just “mudslinging”.

I didnt know rape was supposed to be funny, I guess that’s our bad.https://t.co/WrhIDI8wBK pic.twitter.com/XJsXHPvJYB

Now here’s the problem with Ryan’s “IZ JUS A WORKY GUYS!” defense, his Twitter account was never just for in character comments.  So that defense doesn’t fly.  When you can’t specify when someone’s in character or not, you can’t claim with any real assertiveness that it was all just a gag, because then you start picking and choosing what you MEANT and what was merely IN CHARACTER and not your real thoughts. You don’t get to play that game of jump rope.  You need to be held accountable.  Period.

If you give praise to people, was that just a work?  Were you really ribbing them and knowing full well you think they suck?  No? How are we supposed to believe you, Joey?  You can’t claim that the jokes you made were only done because you were in character and expect the non-jokes to be taken seriously.

It’s this Jedi mind-trick that really pisses me off.  He goes at Jim Cornette, makes up a false claim that Cornette went off on a “homophobic rant” and then claims when presented with evidence of the things he said that it was merely “mud slinging”.

No, Joey, joking about domestic abuse and claiming that a movie raped you isn’t “mud slinging”.  It’s calling you out on your destructive and problematic language.  Keep in mind we’re all in on the work.  We get it.  Pretending to be a child molester in 2017 isn’t cute or cool or funny.  People defend him because people defend shitty things.  Yet, he made that joke.  In TWENTY-GOD DAMN-SEVENTEEN.

Don’t sit here and pass us off as rubes who didn’t get you were in character.  We knew.  It’s still gross.  Imagine this being sold to kids on a Taylor Swift album cover? “Reach into my Easter Basket little kids!”

HOLY FUCK, the Internet would bend over backwards in outrage.  Joey Ryan though? Naw, IT’S JUTS A GAG, A WORK, A JOKE!  There’s a joke alright, and it’s you, you sanctimonious piece of shit.

If it’s all a work, all a joke, all done for “character building”, where’s the line?  What’s the truth?  Where’s the reality?  I have screen shots of pretty mundane and even somewhat sweet things.

Is wrestling not scary?  Should we actually take you guys for granted?

Do you not wish Cherry Bomb (aka Allie) to get well soon?  Was that a sick burn from your character?

What about your self-loathing?  Were you really depressed or were you just simply looking for sympathy?  A real down moment or were you looking to exploit friendships for personal gains?

A NINETEEN-year pro is tweeting about jerking off to his fans when he’s a vet of – then – EIGHTEEN YEARS.  So tell me, where’s the line, Joey?  Is that you humanized?  No?  Then your argument is bullshit.  You are a coward and a creep.  You’ve had nearly a decade of disgusting tweets to your name and you don’t even have the ability to apologize; no, you just block criticism.  You’re like the Cheeto in Chief

Nineteen years a pro.  With a history of gross content to his name, using his gentiles to get over, and allowing his fans to touch him.  Where’s the line?  When as a culture and society do we say enough?  We see celebrities all the time get shouted down for exploiting their fanbase or stepping over the bounds of good taste.

Joey Ryan has stepped over it again and again and again and the only thing that is protecting him is his popularity both inside and outside the industry.  His friends will keep booking him, because pro wrestling doesn’t listen to victims.  They don’t ban troublesome personalities.  They allow those with a checked past to continue to exist.

So to Randy Orton, Vince McMahon, Michael Elgin, Joey Ryan and others; we’re watching and we never forget.  You had your chance to apologize, and you failed to take it.  Now we’re going to watch you like a hawk, because you need to be held accountable for the way you behave.  Your gimmick defense is done; good luck.