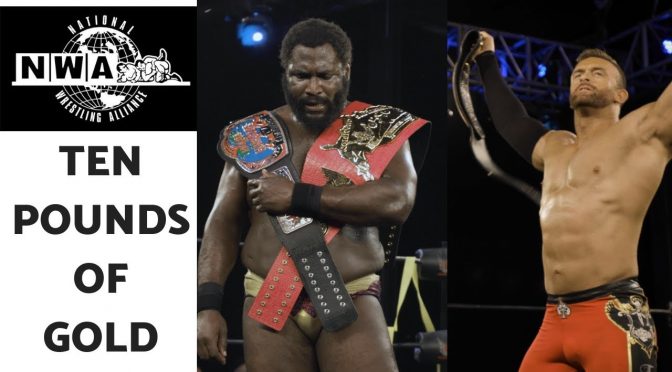 I want to be very clear here, I am an IMPACT Wrestling fan.  I’m also an NWA fan.  I’m a fan of good wrestling all around.  So when news broke the other day that Nick Aldis was calling IMPACT

Nick Aldis is under the assumption that the free market isn’t free, and that Willie Mack is too stupid to know what’s good for him.  I wonder if there’s something more to Aldis’ ‘need’ to defend Mack against the big bad boys at IMPACT Wrestling?  Does Aldis feel Mack just isn’t smart enough?  Why does he feel Mack isn’t smart enough?

Let’s be clear, there’s a narrative by some that Aldis’ shot was at Lucha Underground.  It wasn’t.  Mack didn’t get traded, pushed or prodded to signed with IMPACT.  He was already working with IMPACT.  He signed a new deal because he liked the deal, saying to WrestlingINC;

Well, the contract was good and everything seemed alright.  Impact Wrestling – I’ve been watching it since way back in the day when they used to have the weekly PPVs for like 12 bucks. The reason I wanted to go there was because of the X-Division and the six-sided ring, but they don’t have that no more. They have the best talent in the world, so why wouldn’t I want to be here?

On one hand, the reasoning for Aldis’ concern about IMPACT could be driven by Jeff Jarrett’s lawsuit with IMPACT Wrestling.  Aldis is close with Jarrett, or at one time was much closer, and has credited Jeff Jarrett for his career.  He recently told The Two Man Power Trip;

So I decided after he had been inducted into the Hall of Fame, I reached out to him and asked him, said there was no pay day but I’d really like it and it would mean a lot to me if he was part of my entourage and walked me to the ring at All In because it is a testament to you. You helped teach me to be ready and he did it.

He also tweeted out a similar message, saying;

When we discussed the concept of having teams lead us to the ring for the biggest match of our career, the conversation inevitably turned to whom the team member would be; friends, colleagues, mentors, and put simply, people who have been important figures in our respective tapestries. Jeff [Jarrett] is without a doubt one of those people to me.

…This was about giving a second chance to the man who gave me my first chance to be a champion. Thank you, Jeff.

So clearly he’s seen first hand what could happen when you work for IMPACT; except he hasn’t.  Because in IMPACT’s own filings about the Jeff Jarrett lawsuit, IMPACT claims that all the deals they’re holding Jarrett to, Jarrett himself created.  They’re just holding the contracts and deals to the logical conclusion.  This lawsuit is more about Jarrett getting a few more licks in on his old promotion, knowing he’ll never be invited back after working a majority of 2017 intoxicated and causing multiple issues that didn’t need to arise.

On the flip side, Aldis is currently close with Billy Corgan, the owner of the National Wrestling Alliance and the main member of Smashing Pumpkins; having kicked out all the original members at one point or another.  Corgan gave a lot of money to Dixie Carter and TNA, only for Anthem to come in and purchase the promotion.  Anthem settled all outstanding debts against the company and any lingering lawsuits.  I’m sure Corgan has some misgivings with Ed Nordholm, as Jarrett does, but there’s really no reason for it other than petty jealously.

Even worse yet, Nordholm only has so much influence with IMPACT.  He serves as the parent companies chief advisor for the brand but the day-to-day is ran by Scott D’Amore and Don Callis.  Two men who’ve never worked with Aldis.  D’Amore and Aldis may have crossed paths for a few weeks, but the two didn’t share much overlap during their original tenure; if at all.

So where does Aldis get off calling IMPACT Wrestling “scheming carny wrestling BS”?  Well, nowhere actually.  There isn’t a good reason to hold anything against the company anymore.  His biggest issues were with Dixie Carter, John Gaburick, Bruce Prichard, and Jeff Jarrett.  None of them are there anymore.

According to PWInsider there are people within the NWA who are unhappy about Mack signing with IMPACT as Mack was “supposed to start going with NWA on a full-time basis”.  Really?  When was this supposed to happen? Since the NWA was bought by Corgan, they’ve ran ONE show that wasn’t sponsored or produced by another promotion.

Mack has wrestled more times with House of Hardcore over the last two years than he has under the NWA banner.  What “full time” schedule are they going to be able to offer?  It’s no surprise that the NWA isn’t in the best shape.  Their digital series is doing fine, but nothing that would warrant a full tour.  They’ve lost one of their most needed assets, Sam Shaw – who signed with NXT, as he was not just a wrestler but also a backstage talent who designed many of the companies logos.  The NWA is also having to deal with the fact that Billy Corgan just isn’t a popular or likeable guy.  All one needs to do is look into Corgan’s handling of his past band-mates, how he treats critics of his music, and why he’s no longer head of Resistance Pro Wrestling.

Oh, you didn’t know this was Corgan’s THIRD time at the head of a promotion?  Well, now you do.

This whole situation reeks of sour grapes, and nothing more.