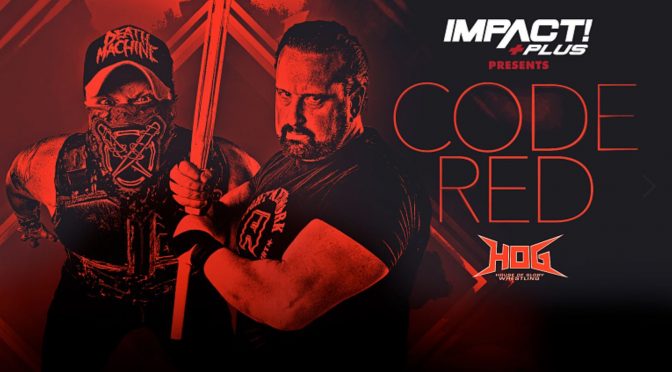 IMPACT Wrestling will be streaming Code Red on their IMPACT Plus service this Sunday at 8 P.M. EST.  No word on how the tickets are doing, but if there’s any left, the event is being held at the NYC Arena in Queens, New York.  The venue is the home of House of Glory, the promotion ran by former IMPACT Wrestling X-Division Champion Amazing Red.  Red has recently retired and won’t be wrestling, but he may make an appearance.

If the show goes off without a hitch, then it’s only going to help raise the profile of IMPACT’s new streaming service IMPACT+.  These seem to be special attraction events, though admittedly there isn’t much about Code Red that reaches into the ‘special’ category.   Red isn’t on the card, and none of the House of Glory wrestlers are of any sizeable name value.  That said, it’s still good for growing relationships within the wrestling community.

Let’s take a look at the card announced;

Main Event – oVe Rules Match
Tommy Dreamer vs. Sami Callihan
– This is a reigniting of their feud from earlier this year/late last year.  Sami Callihan is the modern day Raven with his unique promos, his cult like group and his ability to reach nerves with just his voice.  While Callihan has had an up and down run with wins over top names as of late, I fully expect Callihan to put Dreamer down for the count.  Dreamer, at only 48, is still as good as ever.  Which is either huge praise or a ruthless criticism depending on how you view Dreamer.  Dreamer has been a huge help for IMPACT in recent years and it’s great to see him main event a show that isn’t a House of Hardcore event.

Mixed Tag Team
Johnny Impact & Taya Valkyrie vs. Eddie Edwards & Alisha Edwards
– This should be a fun bout.  Eddie Edwards is still an elite level worker, and his recent personality change has made him a unique foil in the right circumstances.  Facing off with Johnny Impact will make for a great ring and character encounter, as they’re polar opposites of each other.  Taya and Alisha won’t have the same gravitas but should both carry their share of the match.  This is one of Alisha’s more high profile matches in IMPACT, so it’ll be a good thing if she showcases her best stuff.

Singles Match
Michael Elgin vs. Willie Mack
– My issues with Michael Elgin aside, this might be an entertaining match.  As entertaining as Elgin can be.  Willie Mack is one of the more unique and versatile performers, never pigeon-toed to just one type of match.  Mack’s a modern day Dusty Rhodes in his ability to connect with the audience wherever he goes, and with Elgin’s ability generate real heat, the two should have a decent outing, though I do hope Elgin loses.

Triple Threat Tag Match
LAX (Santana & Ortiz) vs. oVe (Dave & Jake Crist) vs. New York Wrecking Krew (Smoothe Blackmon & Chris Seaton)
–  I’m not familiar with Smmoothe Blackman or Chris Seaton, but the other two are icons in IMPACT tag team history.  oVe have become a great heel faction, anchored by the original members Jake and Dave Crist.  The two feuded with LAX throughout 2017 and built up a reputation that both teams still live up to this day; a reputation of out working everyone.  I think LAX will get the win, as it’ll probably be made into an IMPACT World Tag Team Championship match.

HOG Crown Jewel Championship Match
Rich Swann vs. Ace Austin vs. Trey  vs. Smiley vs. Evander James vs. Mantequilla(c)
– Smiley, Evander James and Manetequilla will get the same opportunity to showcase themselves as Seaton and Blackmon in the other match.  Rich Swann, Ace Austin and The Rascalz’ Trey will be the reason to watch this match for IMPACT fans.  With the HOG World Champion Anthony Gangone not defending his title (or appearing at all), this will be HOG’s most prestigious title on the card.  I could see Swann or Austin winning here, or Mantequllia retaining.

Tag Team Match
The Rascalz (Dez & Wentz) vs. The North (Ethan Page & Josh Alexander)
– These two teams have a lot to prove to face off with LAX, and right now it seems like The North is the team to beat.  Both young teams are wonderful and have some serious fan support; it’ll really come down to how IMPACT wants to book LAX’s next title defense.  Which would either be as a face, or as a heel.

Singles Match
Moose vs. Ken Broadway
– Moose wins pretty easily in a squash.  Though I doubt it’ll be a short match.  Moose is often in these positions on these types of card, and Moose rarely loses.  So expect Moose to win in about eight minutes.

The event promises to be a unique affair with some intriguing matchups and new talent to scope out.  I’ll be watching it live at 8 p.m. EST on the IMPACT+ ap, and live tweeting on Twitter @NerdCorp, so come join me then.