Marcus and I were talking about this on ComicCorp about what show was next for the DC Universe service, and we both thought it’d be the Harley Quinn animated series, featuring Kaley Cuoco as Quinn.  However, it has now been confirmed by Swamp Thing will instead debut on May 31st, a week following the season finale of Doom Patrol.  This will be the trend for DC Universe, where at least a new episode (or multiple for Young Justice) will debut every week from here on out.  Swamp Thing is reportedly still in the midst of principal photography, but should be ready to go in two months.

DC has also unveiled a new Batman logo celebrating the 80 years and 1,000 issues of Detective Comics.  The logo borrows form classic designs of the logo, including the iconic blue and yellow that was really prevalent in the mid 70’s-early 90’s.   DC’s press release for the logo and issue #1001 is below; along withe cover.

Batman in Detective Comics has had a long history—80 years to be exact—and has had more than a dozen different logos over the decades. The current logo, which has been the trade 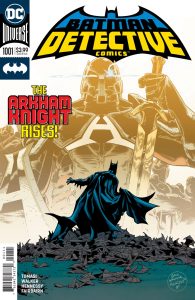 dress for Detective Comics since 2003, made its final appearance this past Wednesday when DETECTIVE COMICS #1000 hit shelves. #LongLiveTheBat!

Announced on the DC Celebrates 80 Years of Batman Comics panel today by Detective Comics scribe Peter J. Tomasi, beginning on April 10th Detective Comics will have a new logo that ushers in a new era for the World’s Greatest Detective! The new logo will debut in print on the cover of DETECTIVE COMICS #1001. This exciting moment in publishing history coincides with the launch of a new Arkham Knight-focused story by Tomasi, Brad Walker, Andrew Hennessey, Nathan Fairbairn and Rob Leigh.

DETECTIVE COMICS #1001 will be available in comic book stores and digitally on April 10th, 2019. For more of the latest news and updates on DC and DETECTIVE COMICS visit www.dccomics.com, www.batman80.com or the DC YouTube channel. #LongLiveTheBat

DC and Epix released the first look at Pennyworth, featuring Jake Bannon as Alfred Pennyworth.  The series is set in the 60’s, when Alfred was a former member of the SAS (British Special Forces).  The show will be similar to Krypton, as it’ll feature looks at Thomas Wayne, and older characters in the Bat-mythos.

DC Quick Hits – The first season of SyFy’s Krypton is coming to DC Universe, as was expected, and will release next month.  The second half of Young Justice‘s third season is set to start for July 2nd, 2019, thus confirming that Swamp Thing will end on June 28th at the latest.  Young Justice‘s third season also bucks the trend of Friday releases, as it’ll drop on a Tuesday; just in time for the Fourth of July weekend.  Jai Courtney himself revealed he’ll be back for Suicide Squad 2 according to Business Insider.  TVLine’s Michael Ausiello revealed that a ten-year old Barbara Gordon will make her debut in the series finale of Gotham.

Marvel rumor mongers MCU Cosmic is reporting that the Eternal’s gay-male lead that was revealed is rumored to be Hercules.  The rumor is unconfirmed and may mirror the Earth-12025 universe where Hercules and Wolverine were an item.    The character in the prime Earth-616 cannon is straight however, as is the Greek demigod the character is based off of.  The only name so far attached to the project is Angelina Jolie.

Quick Hits – Stephen King, who’s been harsh on some film adaptations of his books has apparently given the Pet Sematary reboot that is out in theaters.  Australia’s branch of Target stores is reportedly listing Red Dead Redemption 2 for the Nintendo Switch, confirming for fans that the game may in fact be ported over.