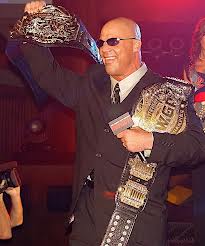 Major Health Issues? – I’m hearing reports that the illness going around is either mumps or measles, but most are relating mumps to me. The illness is causing major issues with booking, touring, and the upcoming TLC pay per view. no word yet on how Bo Dallas, or potentially anyone else for that matter, contracted this, considering the availability of mumps vaccines. The U.S. has foreign travel shots one would need to have in order to re-enter the country, so it begs the question are the WWE talent not getting their shots?

Huge Changes to TLC This Sunday – Roman Reigns is being held off of the show on Sunday due to being tested for the illness Bo Dallas has, ad hasn’t gotten the results back from yet. No word on if he’s ill, or if this is all strictly precautionary, but we’ll have to see what happens going forward. The match is still set to take place, with Kurt Angle of all people replacing Reigns in the match. That isn’t the only change made to the as Bray Wyatt (and JoJo) have been pulled as well. AJ Styles has been brought over from SmackDown to face off with Finn Balor at the event.

AJ Styles has faced of with a lot of top talent prior to joining the WWE, like Neville (known as PAC), though he has never faced off with Finn Balor in a 1 on 1 match. He did face off with him during his tenure in TNA, during a NJPW crossover event where he teamed with Christian Cage and Petey Williams against Finn Balor (t.k.a. Prince Devitt), Milano Collection A.T. and Minoru Tanaka in a six man match. That’s the only match that I know where these two ever faced off.

UPDATE: As of this writing, the WWE has confirmed that three wrestlers have been diagnosed with mumps. Bo Dallas, Bray Wyatt, Roman Reigns, and JoJo Offerman all were tested for mumps. So either Bo is already considered infected, and they’re referring to the three new names, or one of the four isn’t infected. It makes sense that if anyone isn’t infected, it’s JoJo, as WWE already replaced Reigns and Wyatt.

AJ Styles Off Tour Due to Illness – AJ Styles was removed from this weekends events due to an illness; though it’s being described as a stomach flu, not mumps. Styles is currently booked to face Finn Balor and is expected to be healthy enough to return to the company and tours by TLC this Sunday.

Kevin Owens Off Tour – Kevin Owens is also off the tours this weekend, returning home to Canada. I haven’t heard why, but PWInsider is reporting that it’s a family matter and not a professional one. No word yet on why Owens is off the tour, and if it’s family related, we won’t report it. While we make fun of Owens, we do hope everything is well with him.

Don’t Trust Sports Illustrated – We reported earlier that Nia Jax was apparently unhappy with her pay and status within the WWE, and S.I. echoed that story as well. We reported that we weren’t to which degree she’s unhappy, just that she was. Apparently she, and a lot of the women are unhappy, but it’s not just them, it’s the men too.

Sports Illustrated claimed that Nia Jax was attempting to use her relation to The Rock as a way to improve her standing in the company and lobby for a better contract, which was the only way she’d return. That’s not the case according to The Observer and Dave Meltzer. Apparently she wasn’t booked for any major angles as of right now, asked for time off heading into the European tour, and everyone, including herself, expects Nia back for the European tour.

So Sports Illustrated somehow took a company wide issue, and turned it into a leverage storyline. Same guy (I believe) was also the one who said Anthem was going to sell IMPACT despite no one else having that story. Yes, there are many people who are unhappy with their pay right now, Cody Rhodes and Austin Aries are helping them feel real bad about their pay, but Nia isn’t using her family as leverage to gain a better contract than others.

Bullet Club Member is Never Going to WWE – The headline is misleading but what else could he mean? Hangman Page recently spoke about watching Luke Gallows and Karl Anderson struggle in the WWE, and he flat out said “….I’ll never watch (the WWE product) again”. He ripped the company, and cited Jimmy Jacobs as a big impact on his career in the same interview. I highly doubt he’ll ever join the WWE with the regime in place. Page is a future star in this business, so that’s not a great thing for the WWE.

Quick Hits – If U.K. series happens, it might be under the name King of the Ring. Taryn Terrell has left IMPACT again, many believe it to be similar to the reason she retired back in 2016 because she felt wrestling wasn’t good for her new spiritual awareness. African wrestler Power Uti was recently arrested in Lagos, Nigeria (presumably) under suspicion of his wife’s death. Uti made headlines a few years ago when he essentially kidnapped Luke Gallows and Cliff Compton when they toured Nigeria. Cody Rhodes revealed that he makes triple the amount per match now compared to the WWE’s pay, as well as double his downside guarantee.

Eddie Edwards Gets His Shot But Will It Matter

Eddie Edwards gets his shot but will it matter? - Making an IMPACT (Podcast)

Wrestler Of The Week Alexander Hammerstone