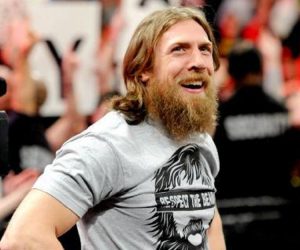 Daniel Bryan Update – Daniel Bryan is growing his hair out, and you may be surprised to know why (maybe…). In he and Brie Bella’s latest Instagram Q&A session, Bryan said that the reason he continues to grow his hair out (it is now near the length it was at at the end of his WWE career) is because he is hoping to work Lucha Libre matches in Mexico.

“We don’t need to talk about why I’m growing my hair out,” Bryan said. “It may or may not be because I want to do apuestas matches in Arena Mexico.” Byran is referring to the mask vs. mask, hair vs. mask, and hair vs. hair type matches that are common in Mexico. He went on to tease a hair vs. mask match against 54 year old luchador Atlantis, who is undefeated in those types of matches, or a hair vs. hair match against Rush, a 29 year old who is also undefeated in those types of matches.

Torrie Wilson Speaks – WWE alumna Torrie Wilson reflected on Hugh Hefner’s impact on her career, saying he changed her life. Wilson posted to Instagram paying homage to the late Playboy founder, who died on Wednesday evening at the age of ninety-one. You can see her post below, in which she says, “I can’t begin to tell you how much being on this cover twice did for me.” Wilson also spoke with TMZ and talked about Hefner and his parties. “I’m so glad that I have those stories for the rest of my life,” she noted. On behalf of everyone here at NerdCorp, we extend our deepest condolences and best wishes to friends and family of Hugh Hefner.

Robbie E Update –  Former Impact Wrestling Tag Team Champion Robbie E has announced his departure from Impact. This follows earlier news that more talent is expected to be released/leave from Impact soon.  PWInsider is stating that Robbie E requested to be released from Impact Wrestling, and they granted his request. He had not been used on TV since signing a new deal with Impact shortly after Anthem bought the promotion.