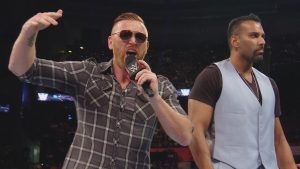 WWE Responds to Jinder’s Racially Insensitive Promo – A “journalist” for the Washington Post tried to write a take down piece against the WWE surrounding the Jinder Mahal/Shinsuke Nakamura’s promo Tuesday night. The promo had Mahal mock Nakamura, using a stereotypical dialect that mocks South Eastern Asians. A lot of people thought it was in poor taste but that not big of a deal. The WWE have responded, saying;

Just like many other TV shows or movies, WWE creates programming with fictional personalities that incorporates real world issues and sensitive subjects.

As a producer of such TV shows, WWE Corporate is committed to embracing and celebrating individuals from all backgrounds as demonstrated by the diversity of our employees, performers and fans worldwide.

It should be noted that both India and Japan are known to have bigoted views on foreigners. So it’s not that shocking that WWE would play into India’s perceived bigotry, despite the fact that Mahal himself is Canadian.

Vince’s Headbutt – It should be no surprised that the WWE is denying that Vince McMahon bladed when Kevin Owens headbutted him. It should be noted that the camera was on Vince the entire time, and blood could be seen pooling immediately after. This hasn’t caused the IWC to stay off the rumor forums though and alleged that Vince did blade. WWE maintains he didn’t, and it seems unlikely that with all the WWE cuts to production, that the WWE would invest in expensive props, like squibs.

I walked past right as he got headbutted in the face and I was like, ‘Wait, what? What?!’ And I backed up to the TV and I’m sitting there with my jaw all the way down to my feet. It was like, ‘Are you kidding me right now? Did that really just happen?’ And then he proceeded to deliver the beating of a lifetime… Man, you gotta hope Vince is alright. Of course we all know how tough he is, but man, that was brutal.

Does Konnan Still Have WWE Heat? – Konnan, during the press conference yesterday, Konnan was asked if he still has heat with the WWE, saying;

Paul Diamond told Vince that he could fit into the outfit, and he could, so they gave him the persona,” Konnan said. “From then, supposedly I had this incredible heat, but when I’ve seen Vince backstage it’s, ‘Hey, what’s up Konnan?’ Stephanie, everybody. When they don’t want you there, they let you know. I know that they’ve even stopped people from actually being in the dressing room, they’ve never done that to me. So I’m not sure if the heat is till there or what the deal is, but that’s the story.

Quick Hits – Total Bellas pulls in 575,000 total viewers. WWE is sending Cedric Alexander down to WWN to replace Davey Richards in the upcoming EVOLVE 92 event. Brie Bella and Daniel Bryan want another child, but plan on doing it after Brie returns to the ring for some time. Paige will return on SmackDown when she does, according to Dave Meltzer.