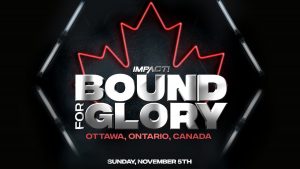 Formal announcement, there will be no more introductory paragraph to my news bits, because often times people read these days later, and the paragraph no longer qualifies to them. Plus I find them needless.

Bound for Glory Announced – We knew on Saturday that IMPACT Wrestling (more on this later) would be taking BFG to Canada, as many thought Toronto would be the place. However, announced today, IMPACT will take Bound for Glory to Ontario, not Toronto. It’ll take place at the Aberdeen Pavilion on Sunday, November 5th. Here is the press release and video for the event;

The Aberdeen Pavilion will also play host to five days of IMPACT television tapings from Nov. 6 to Nov. 10. Ticket on-sale information for Bound for Glory and IMPACT will be revealed in the coming weeks.

“We are ecstatic and honored to bring our blockbuster event Bound for Glory to a Canadian venue rooted in cultural heritage and tradition,” said Ed Nordholm, president of IMPACT Wrestling. “Our loyal Canadian viewers on Fight Network and GameTV have been vocal supporters of IMPACT Wrestling over the years and we thought the nation’s capital would be a fitting place to stage our biggest event of the year. Canadian professional wrestling crowds have a reputation for their energy and enthusiasm, so we are excited to bring them an unforgettable night of action.”

Bound for Glory will feature World Champion Eli Drake, former champion Alberto el Patron and Johnny Impact, the holder of the Mega, Latin American and World Cruiserweight championship belts in Lucha Libre AAA, who will be making his inaugural Bound for Glory appearance. Bobby Lashley has unfinished business; will he return and will his cohorts from American Top Team, led by owner Dan Lambert, continue to meddle with his career? The Knockouts will collide as Hall of Famer Gail Kim works through her final year in professional wrestling, and the stars of the X-Division will bring their high-flying brand of athletics to the ring. International talent for the event will include El Hijo del Fantasma, Pagano and El Texano Jr. from Lucha Libre AAA.

Located in Lansdowne Park, the historic fairgrounds of Canada’s national capital, the 33,000-square foot Aberdeen Pavilion is an Ottawa landmark, which has been home to many significant events throughout the city’s history, including Stanley Cup challenge matches in 1904. Built in 1898 and inspired by London’s Crystal Palace, the venue was designated a national historic site of Canada because it is the only large-scale exhibition building in Canada surviving from the 19th century.

Showcasing some of the biggest stars in professional wrestling, IMPACT airs on Thursdays at 8:00 p.m. ET/PT on Pop in the U.S., as well as Fight Network and GameTV across Canada.

IMPACT Done with GFW? – IMPACT Wrestling appears done with the Global Force Wrestling brand. Several news outlets have reached out to IMPACT and Jeff Jarrett inquiring about the merger. IMPACT was airing the Amped taped shows as ppv offerings, but with the split with Anthem and Jeff Jarrett, that appears to be off.

Josh Mathews was interviewed by PWInsider.com and he had the following to say about the upheaval;

You know, I wish I could tell you everything and tell you that ‘this is what it’s going to be’, because I think we did a great job in January of getting rid of TNA, of getting rid of that brand and becoming Impact, then becoming GFW. Now, you’re right, if you look at that graphic, it says Impact Bound for Glory, and that’s the brand we are bringing to Ottawa. Those are the tapings that is coming to Ottawa. That’s the show that’s coming, Impact. I know that doesn’t really answer a whole lot of questions, but that’s what we’re doing. That’s what we’re bringing up there. That’s what you’re going to see and after what you see on November 5th, to be determined, I suppose.

Jim Cornette Done with IMPACT? – Jim Cornette has announced that he’s done with IMPACT Wrestling for the time being due to visa issues. Cornette has been arrested before in the 80’s for assault and battery and Canada has turned Cornette away from the border before in 2010, so with BFG now filming BFG and the next months worth of tapings in Ontario the following few nights, Cornette is unable to attend. He’s offered to film stuff for the company to write him out if need be.

WWE Bringing Back Starrcade – WWE announced that Starrcade will be returning as a special event on the 25th of November, in Greensboro, North Carolina. It’ll be a house show, and possibly a network special. The card isn’t good. And Cody and Brandi Rhodes have voiced a displeasure of them bringing it back.

If you're afraid an event won't sell cuz' the holiday and want one of my Dad's events…at least book Goldy..

Starrcade was created and delivered by Dusty Rhodes. WWE didn't want to do it while he was here. Now they want to do it and not give credit? pic.twitter.com/5ZLsoptjHE

Here is the official card and press release;

Starrcade returns to Greensboro this November

Starrcade is back, and for the first time in 30 years, it’s coming home.

On Saturday, Nov. 25, during Thanksgiving weekend, Starrcade returns when the Superstars of SmackDown LIVE descend on Greensboro, N.C., for a historic event at the Greensboro Coliseum.

The premier event of the National Wrestling Alliance and, later, WCW, Starrcade got its start in Greensboro on Thanksgiving 1983 with a star-studded lineup that saw Ric Flair defeat Harley Race to win his second of 16 World Championships. Starrcade remained in Greensboro through 1986 and was the stage on which legendary performers like Dusty Rhodes, The Four Horsemen, Magnum TA, The Rock ‘n’ Roll Express and many more etched their names into sports-entertainment history.

As the calendar turned to the 1990s, a new generation of competitors emerged to take the Starrcade spotlight, like Sting, Vader and the nWo. The last edition of Starrcade under the WCW banner took place in December 2000.

Now, fans in Greensboro will get the opportunity to be a part of history, as Starrcade returns with an absolutely stacked card featuring two Steel Cage Matches. Matches announced* for the return of Starrcade include:

The New Day vs. The Usos

The Hardy Boyz are also confirmed to appear at Starrcade in their home state of North Carolina, as are WWE Hall of Famers and Starrcade legends Ricky “The Dragon” Steamboat and The Rock ‘n’ Roll Express!

Tickets for Starrcade will be available starting Friday, Sept. 29, at 10 a.m. ET at Ticketmaster. Don’t miss your chance to be a part of history as Starrcade returns!

*Talent and matches listed and depicted above are subject to change.

Quick Hits – Paige is training for her return to a WWE ring, as she’s at the WWE Performance Center today. Jinder Mahal is currently dealing with a shoulder injury. John Cena Sr. (Cena’s father) thinks Jinder Mahal is a failure as WWE Champion.