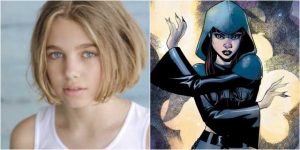 No show tonight. I’m working on making out 100th special and I haven’t been able to find the way to do so, so we’re delaying the 100th until next week. Sorry for the delay.

“Titans” Cast Their Raven – The folks at DC have cast Teagan Croft of “Home and Away” to play Raven in the upcoming DC TV App series. The 13 year old actress is the first of the corp group to be announced. The release describes Raven as;

The daughter of a demon, and a powerful empath who must keep her emotions in check or risk unleashing her demonic side.

Opinion: A little surprising to see someone so young, but I’m willing to wait and see how it goes.

I’ve been a Stephen King fan for decades, and the opportunity to adapt The Dark Tower as a TV series is a great honor. The events of The Gunslinger, Wizard & Glass, The Wind Through the Keyhole, and other tales need a long format to capture the complexity of Roland’s coming of age — how he became the Gunslinger, how Walter became the Man in Black, and how their rivalry cost Roland everything and everyone he ever loved. I could not be more excited to tell this story. It feels like being given the key to a treasure chest. And oh yeah, we’ll have billy-bumblers!

Arrowverse Crossover to Feature Wedding? – The CW President Mark Pedowitz is setting up rumors of a major romantic event for the crossover of the Arrowverse shows. He’s quoted as saying;

Our way of making the show bigger this year was to go even more personal,” he explains, “so it’s a big life event for a few different people on the show. There are many life events that happen.

Opinion: If the rumors are true, and this is some kind of wedding of sorts, that would be very cool. Comics and weddings go together hand in hand, so why not?

Sharon Carter MCU Update – Emily VanCamp plays Sharon Carter in the MCU and there are many wondering when they’ll see the blonde bombshell in another Marvel outing. VanCamp was candid about this saying;

With Marvel, they can give you a call the day before you shoot. You don’t know what’s going on with their movies because they’re very secretive.

When asked if she had been asked to appear on “Agents of S.H.I.E.L.D.”, she said;

I think it was discussed. But I was working on Revenge at the time.

Opinion: VanCamp was always charming on screen. Adding more of the top Agents to the S.H.I.E.L.D. t.v. show is needed to keep ratings up.