Yup, this is uber late. Oh well. Trying out something new, with the opinions on the bottom. See how it flows.

Domino’s First Look – Zazie Beetz will be starring in the upcoming “Deadpool 2” film as Domino, a long time character in the X-Men franchise. The character will debut alongside Cable, and will team up with the titular Deadpool. The first image for Domino has been released and people are sturring. 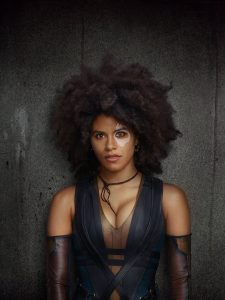 Opinion: I think Zazie Beetz is stunning, but this is more of Fox doing away with iconic representations of characters. From the lack of blue and yellow in X-Men comics, to Wolverine never dawning his iconic look and now a character who looks nothing like her comic book self. Beetz is beyond beautiful, so obviously this isn’t going to be a major issue for me, or anyone really, but it’s still disappointing to see Fox not treat it’s property with any real respect. That being said, while not a great look as Domino, it’s a fantastic shot and look overall. She’s a stunning image and I’m still excited to see her as Domino.

Elongated Man Cast – We now know who’ll play Elongated Man on “The Flash”. Apparently it’ll be Hartley Sawyer, who’s fairly new to the scene. He’ll be a private investigator in the show with “skills that rival Batman”.
Opinion: I’m not sure how I feel about him being some kind of brilliant investigator. Isn’t that what Joe, Barry, Iris…all of them do? Maybe Plastic Man would of been a better fit…..or a Plastic Man-Wells?

Bumblebee Movie Coming Together – Reports from THR reported that John Cena will have a role in the upcoming Transformers spin off, and now we have a bit more to ad, like that Hailee Steinfeld will be the star. The blurp goes as follows;

The story is set in the year 1987, where Bumblebee finds refuge in a junkyard in a small Californian beach town. Charlie (Hailee Steinfeld), on the cusp of turning 18 and trying to find her place in the world, discovers Bumblebee, battle-scarred and broken. When Charlie revives him, she quickly learns this is no ordinary, yellow VW bug.

Opinion: Ugh, just no. No to all of this.

Quick Hits: Josh Brolin confirms that Thanos will be in Avengers 4 as well. There’ll be a comic sequel to “The Nightmare Before Christmas” thanks to Tokyopop. DJ Milky will write the property. (Disney signed off on Tokyopop doing the book).