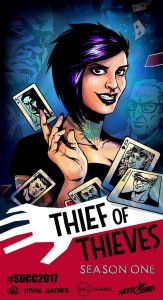 Late day for sure, I’ll have WrestleCorp’s news up after ComicCorp goes off the air!

Robert Kirkman to See Thief of Thieves Get made into Video Game – “Walking Dead” creator Robert Kirkman will get yet another one of his comics adapted into a new form of entertainment, this time with his book “Thief of Thieves” getting a video game release on p.c. The game takes elements of stealth games in the past to create a dynamic looking piece of property that barrows it’s look from the comics. From CBR;

Created by Kirkman and artist Shawn Martinbrough, the comic series follows Conrad Paulson as he tries to maintain his double life as a master thief. IGN reports that the video game adaptation, however, is set to follow the exploits of Celia, an apprentice of Paulson’s. Although she was first introduced in the comic, the video game is set to delve deeper into the thief’s background, fleshing out how she “became an accomplished thief of her own.”

Gerard Way Comic to Netflix? – Gerard Way and Gabriel Ba’s comic, “The Umbrella Academy” will be made into a series thanks to Netflix. The 2007 Dark Horse series was originally optioned by Universal Pictures as a movie, but then was moved to the television side, as part of the Universal Cable Productions. Obviously nothing happened and Netflix acquired it with the intent to make it.

The series apparently focuses on a dysfunctional family of superheroes, who are forced to join forces to fight off an evil force years after being apart.

DC Comics Crossover to Feature Archie Comics – Well folks, this is new. Poison Ivy and Harley Quinn are heading to Riverdale to hook up with Betty and Veronica. Nope, not kidding. Harley Quinn’s creator Paul Dini is working with Marc Andreyko (writer) and Laura Braga (artist) to create a DC/Archie Comics crossover for the ages. Dini spoke to Entertainment Weekly saying;

It’s the sort of offer you scream out ‘YES!’ to before your eyes reach the middle of the email. I’ve always wanted the chance to play in Riverdale and to help Harley and Ivy invade it is a dream come true. Marc’s a great talent and a good friend. Writing this series with him has been like sitting on the lawn during summer vacation and reading a big pile of DC and Archie comics. Except we have to stay indoors and type a lot. 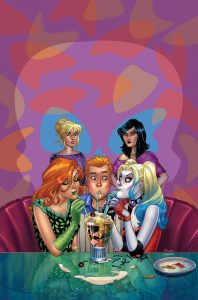 Quick Hits – Stan Lee’s wife Joan has passed away today at 93. Director of “The Batman” has plans for trilogy. Steven Yeun wished his character Glenn got more of his ‘fair due’ in the series and in merchandising.