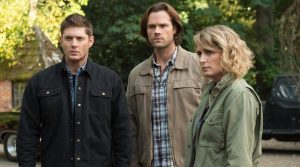 There are few things better than a turkey reuben sandwich. And that’s what I just had for dinner. Wow. These intros really aren’t holding up today….NEWS TIMES.

‘Supernatural’ Spin Off Coming – If you were to list the top characters all time in the hit “Supernatural” show, somewhere between #4 (Bobby) and #10 (Gabriel) would be former Sheriff Jody Mills. The longest running female character was introduced back in season five as the sheriff of Bobby’s hometown. Since then she’s become a critical and very close ally to the main characters Sam and Dean. Well, the near-long decade of recurring roles in the show could be about to pay off for Kim Rhodes (Jody), as the actress is set to star in a backdoor pilot for a spin off series called “Wayward Sisters”. The episode will air during the 13th season of the show, which may be the second to last season of the series. This is the second time the series has tried a spin-off attempt, which occurred back in 2014. The episode pitted star crossed lovers in a ‘Romeo and Juliet’ type vibe.

This version would be far different. Mills has become a bit of a mother-figure for several young women who’ve lost their families due to the Supernatural. One of which is the daughter of Castiel’s vessel, Jimmy Novak. The series would focus on Mills essentially taking in several more young girls, who’ve been ravaged by the supernatural plight, and would showcase her helping them grow, evolve and mature into a new crop of hunters.

Joel Schumacher Tidbits – Since apologizing for “Batman and Robin”, we’ve gotten a slew of details about the Batman films he’s been a part of and what his plans were going forward.

In one instance there’s a rumor that Sir Patrick Stewart (Star Trek: Next Generation and American Dad) was set to be Mr. Freeze. Schumacher rebuffed that by saying;

It’s a wonderful idea. But no one ever suggested him. I had met with Arnold several times, because he was always interested in working together.

He also explains that he wanted to do a “full Arkham movie”, saying;

I always wanted to do a whole Arkham movie, and did a scene at the end of Batman Forever when Jim is in a straitjacket(sic) and Nicole [Kidman] comes to see him. And it was just a nod to back to Arkham asylum which I love, and I thought it would be fun to put the other villains up there.

The idea apparently ended when the fourth film, “Batman and Robin” crashed at the box office.

Joss Whedon More Involved in DCEU – While Warner Bros. admits that “Dawn of Justice’s” tone was ‘too dark’ (we disagree!), they’re still going forward with the DCEU but apparently, according to rumors, Whedon’s far more involved than previously thought. John Berg, an executive producer of the films said to Variety;

He’s a big part already. We love him. He’s a great partner, collaborator; we want him to be ensconced.