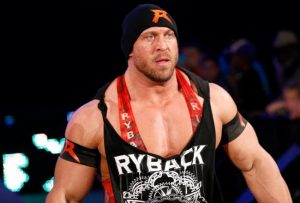 Ryback Speaks…Again – During a recent edition of his podcast (via wrestlinginc.com), Ryback spoke about a multitude of subjects. When talking about wanting to face off against The Undertaker and Brock Lesnar, here is what he had to say…

“I always wanted to wrestle Undertaker. It was always one of my things, but Brock Lesnar is the other one, and we’ve talked about that [on the podcast] and it if happens, it happens. If it doesn’t, I don’t give a f–k anymore. It’s just not even… I’ve let go of having goals, like I told [podcast co-host Pat Buck], I had that WWE Championship as my number one goal for however many years, and I realized I can’t have goals that are determined by other people.”

He also spoke about how he felt like he was looked dumb via Cody Rhodes and more.

NXT Update – The WWE UK Twitter account posted an announcement that the company is canceling the June 6th NXT event in Manchester, out of respect to the victims of the Manchester Arena bombing this week during an Ariana Grande concert. Here is what the statement had to say…

“Out of respect for all those affected by the Manchester tragedy, WWE is cancelling the NXT event on Tuesday, June 6 at the Manchester Arena, and giving fans who purchased tickets to the show a full refund and offering them the option to receive a free ticket at point of purchase to the NXT show on Wednesday, June 7 at First Direct Arena in Leeds.

Our Superstars will be in Manchester on June 6 visiting with those affected by the tragedy and WWE is making a donation to the We Love Manchester Emergency Fund.

We look forward to returning to the Manchester Arena on Monday, November 6 for Raw and Tuesday, November 7 for SmackDown Live.”