After the season finale of the 5th season of “Arrow”, it’s pretty clear: Adrian Chase, aka Prometheus, is the greatest villain ever. Not in the “Arrowverse”, not in the DC Comics cannon of live action content, not in television, or movies or literature. EVER. A truly sadistic, unrelenting, force of evil that never was truly tested by Oliver Queen or his Green Arrow persona. Why was he the best villain ever? Lets look at why! 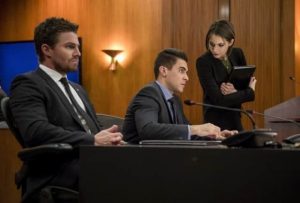 – What a great way to go about ruining someone, simply by earning someone’s trust. Adrian Chase came to Oliver as a friend, working with the mayor on righting the wrongs of the city, and doing what’s best for the citizens of Star City. A true civil servant. Hell, it was even Chase who was responsible for getting John Diggle to safety in Star City lockup, instead of on the road with a man who aimed to kill Dig. At one point Chase even took a bullet for Oliver, which really sold him on the “he’s one of us” mantra. Chase was Oliver’s right hand man, and what better way to hurt someone by removing that right hand in the most horrifying way possible? 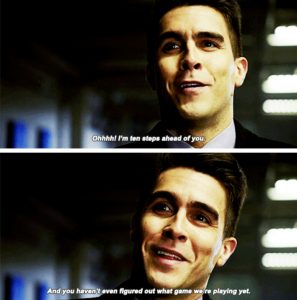 – Chase always had Oliver’s number. Whether it was planting a sleeper agent inside Oliver’s camp, knowing the perfect times to attack Oliver’s allies, or even rigging himself as the dead-man switch for an island full of bombs. Chase had Oliver’s number. Chase never truly allowed Oliver a win, and if Oliver somehow did “win”, it was a mirage. A momentary lull in the action. A timeout. But the outcome was always rigged. For in the end, Oliver never had a choice.

– When Chase’s identity was found out to the Arrow-Crew, no one could go after Chase. He had the team in the proverbial vice grip. So what’d he do? He taunted Oliver in public, to his face. He got Oliver to denounce himself (the Green Arrow), and played mind games with him. There was always a lingering doubt that Chase could, at any time, blow up the ruse and send the dogs at Queen for being the Green Arrow. He knew the buttons to push and like a kid in an elevator, he pressed them all. 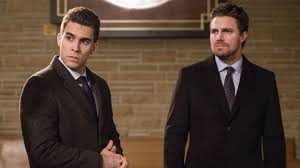 – We know that he worked with Oliver in the city’s office, earning his trust and friendship; so obviously the betrayal was coming. That’s why it’s not higher on the list; we knew it had to happen. And when you consider the laundry list of deeds that Chase afflicted upon Oliver, it really does seem like a minor detail. Your best friend can “betray” you by gossiping about intimate details, so it feels a bit weak to put his betrayal of Oliver any higher. In fact, seven feels pretty high. But to earn their trust, then shatter their confidence in one fell-swoop….it’s a beautifully devious thing to do. 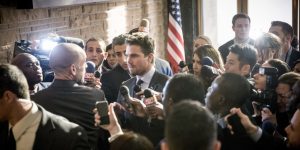 – Chase was a walking bomb. Everything he did was calculated to untold levels. Chase knew he’d be found out eventually, so what did he do? He found himself a job that would cause the most damage once his identity was revealed. Star City’s District Attorney. Essentially any villain that Oliver and his team took down as the Green Arrow and Associates, would be tried by Chase and convicted. So when Chase was found out to being the deadly Prometheus (aka the Throwing Star Killer), every single one of the people he put away were essentially pardoned and retroactively freed. All of those months of work, for nothing. All because they “outed” Chase as the villainous Prometheus. Seems like a hollow victory. 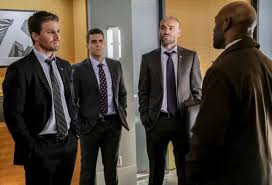 – It’s bad enough that Chase taunted Oliver, caused untold harm to countless civilians and rattled the entire cities faith in one another, but to do it by ruining Oliver’s reputation as mayor too was sheer brilliance. Chase, Oliver and the head of the Star City Police Department orchestrated a lie that came out, where Oliver had them cover up the details of the Green Arrow’s involvement in the Throwing Star Killer’s murder of a S.C.P.D. officer. Sure, it was at the Green Arrow’s hand, technically, but only because Prometheus dressed up the officer as himself, and lured the Green Arrow into killing him. When that happened, and the truth came out, Queen’s once mighty reputation was nearly sullied for good.

4) He Killed Anyone He Had To 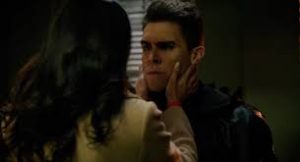 – In easily the most brutal and defining moment of Prometheus’ Tour of Torment on Oliver, he did the one thing no one expected. In order to stop Chase, Oliver got Chase’s own wife to try and convince him to stop. Tearfully, with hope in her voice she approached the mass murderer that was her husband and begged him to stop, and for a brief, tearful moment you think he will. As he embraces her, he damns Oliver for bringing her into this, and then brutally kills his own wife, a person he genuinely cared about. He did it without a second thought, or even a moment to think about his actions. He did it swiftly, and with purpose. He was above feelings. He was above remorse. He was too far gone. No other villain Oliver has ever faced was that vile. Malcolm Merlyn protected his family at all costs, Slade Wilson was motivated due to the death of the woman he loved, Ra’s al Ghul was a man of (twisted) honor, and Damian Darhk did everything he could to keep his family safe.

But not Adrian Chase, his desire to destroy Oliver was the only thing that caused his dark heart to beat.

– The dude was “ACES” at kidnapping people Oliver cared about. He kidnapped or orchestrated the kidnappings of LITERALLY everyone but Rory Regan. He kidnapped Oliver’s one time lover, Susan Williams, as well as every member of the team, as well as his Deputy Mayor Quintin Lance, his ex Samantha Clayton, her and Oliver’s son William and even Felicity’s then boyfriend Billy Malone, the fallen S.C.P.D. officer that is later pinned on Green Arrow. The dude literally should of called himself Prometheus the Abductor.

– Ra’s has tried, Merlyn too. Lian Yu, the Bratva, Slade Wilson, no one or no thing could break Oliver. He stood in defiance of all of his enemies and obstacles. Even his own mother and partners like Felicity (…it was always just Felicity) tried to render Oliver inert at times. They all failed. Not drugs, not Count Vertigo, not anyone could break Oliver.

Adrian Chase got to hear everything he wanted from Oliver. Oliver’s confession about enjoying the killing, his admission of guilt, and even him begging for Chase to finally kill him. But the most, the truly brutal and defining moment was when Oliver lied on the ground, after enduring the most intense moments of Chase’s torture, was when Oliver apologized.
“I’m sorry for any pain I’ve caused you.” – Oliver
“I believe you, I just don’t care.” – Chase

It was the coldest moment in the show history, because it was said with a faint smile.

– The greatest lie that he told Oliver was that there was an avenue in which Oliver could win. Oliver believed he could stop Adrian Chase, because Chase let him believe it. At no point was Chase ever going to let Oliver win, because victory, nay, choice, was a mirage. It was never truly there. Oliver had no real choice. It was all set up. Chase’s heart beat was connected to a trigger, and if Chase died, the island would be besieged by explosions, killing anyone still on it.

Upon the final battle, The Team sprints for a sea plane near by that was dismantled and torn apart by Chase. Chase, knowing he’d get away after the final big fight, stashed William on a boat and hopped on, knowing that Oliver would just have to follow by himself. One final confrontation ensues and Oliver thinks he won, until Chase holds William at gun point. Finally, Chase would find out what kind of man Oliver was. If Oliver killed Chase, the island and Oliver’s friends and family go up in a wave of explosions. If he doesn’t, then William dies. Ultimately Oliver puts an arrow into Chase’s leg and “saves” William.

Except he didn’t. He never did. He couldn’t save anyone, because it was already set in motion. Chase, lying there in his own blood “beaten”, pulls out a revolver and one last time taunts Oliver before pulling the trigger, which causes the island to go off, presumably killing everyone on it.

Whether anyone dies from the explosions is irrelevant (Evelyn is like, “SUPER-DEAD” though), it’s the fact that Oliver never had a choice in what happens. Chase had beaten Oliver, even if Oliver wins the day. Chase will go down as the greatest villain ever because of the actions he took, the steps he laid out, the leeway he allowed Oliver to have, and the fact that to Oliver, the choice was a lie. The victory was for naught and the conclusion was always guaranteed;

Oliver was always going to be the reason Chase died, even if Oliver did everything he could to prevent it.