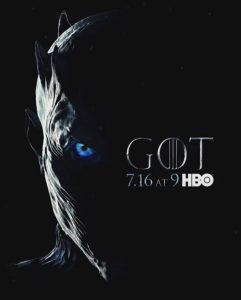 So my phone fell into water yesterday, and I somehow salvaged it. So far, no major glitches. Maybe that rice thing works. TO THE NEWS!
(Supergirl and Flash had shit season finales, I said it)

Justice League Dark in Need? – It’s being reported that Dark Universe, the Justice League Dark film that was in production, has lost it’s director Doug Liman. No word yet on why Liman is out of the film, but the film originally had Etrigan The Demon, Deadman, Zantana Zatura, John Constantine and Swamp Thing.

Game of Thrones Season Seven Trailer – The second last season of “Game of Thrones” has a trailer. It shows us very little. There are only 13 episode left in the series.

Deadpool’s 2 Villain Revealed? – Deadline is reporting that “The Strain’s” Jack Kesy has been cast as a major villain in the upcoming sequel. They alleged that he’ll probably be playing the cousin to Banshee, Black Adam. There’s a possibility that we’ll see Banshee as well, as there are rumors that Deadpool 2 is going to have more X-Men characters than the first film.

Top Gun 2 a Go? – Ghostrider, you are clear for a flyby. Tom Cruiser confirmed on Australia’s t.v. morning show, “Sunrise”, that the long awaited sequel to the 1986 smash hit, “Top Gun”, is in fact going to be made. Cruise said during his stop by the set that;

It’s true. I’m going to start filming it probably in the next year. I know. it’s happening. It is definitely happening.

The film has been in the works for some time now, dating back nearly seven years. The film was thought dead in 2012, when the director of the first film, Tony Scott, committed suicide in 2012. Jerry Bruckheimer appears to be attached to the film now, and by all accounts we’ll be getting more aerial awesomeness in 2018 or 2019.