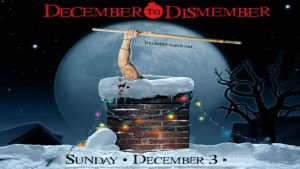 Talk about a challenge. I’ve decided to fix the December to Dismember card and I have no idea how it’s going to go.

So here are the rules. I can’t use anyone not on the roster, in this case the ECW roster circa December. So I can’t barrow talent from the RAW or SmackDown brands, or use someone from another company. i have the ability to override anyone’s misgivings or concerns, and the only thing I have to do is keep relatively believable.

Kelly Kelly, Ariel, Trinity,
*Because the WWE ok’ed MNM and The Hardy’s appearing, I get to use them in the rebooking.

So lets set it up.

The Build Up
– Lets figure out the main event. Big Show is the World Champion and he can serve as a true catalyst to putting over someone, so either Lashley or CM Punk will have to face him. Lets also be real here, as much as I loved Punk and wasn’t a fan of Lashley, I think Lashley has proven that with the right talent around him, he can be a big time star. Also, I have plans for CM Punk that I think everyone will be ok with. So we book Big Show against Lashley for the main event in a cage match. Essentially everything Lashley did with Umaga in the cage, would be done with Big Show.

Heading into the show, Paul Heyman announces that there’s going to be an ECW World Tag Team title tournament and an ECW Television Championship tournament.

In the world tag team tournament, we’d have Terkay and Burke, Daivari and Khali, The F.B.I., The Heyman Security Team (who was a concoction of different people), Test and Mike Knox, Sandman and Dreamer, Dupree and Scott 2 Hotty.

In the opening round, which would happen on ECW T.V., you’d have
Terkay and Burke vs. Dupree and Scotty
Dreamer and Sandman vs. FBI
Heyman Security vs. Test and Knox
Daivari and Khali vs. Balls Mahoney and Matt Striker

Terkay would eat Dupree and Scotty alive without Burke every getting involved in the match, while Dreamer and Sandman get the clean win over the FBI, The Heyman team goes over after Knox and Test break up and brawl, and Khali and Daivari destroy Mahoney after Striker leaves the match shortly after showing up.

This will prompt Heyman introducing two teams he hand invited as “guests” to try and “swoon” them to sign with ECW. To open the show, MNM and The Hardy’s would “debut” with ECW in the ECW Tag Team Title Tournament. Instead of the Hardy’s going over here though, MNM does.

In the next match, we’d get Dreamer and Sandman going over after Terkay gets knocked out of the ring by Burke, and Burke eats a DDT.

So now that we got the tag team titles situated, lets work on the ECW Television tournament.
In the tournament, you’d have Balls Mahoney, Matt Striker (this would be the reason Striker doesn’t show up in the tag team tournament side of things), Kevin Thorn, Shannon Moore, Hardcore Holly, Rob Van Dam, Sabu, and CM Punk.

So this tournament shakes out like this (It starts before the tag team tournament)
Shannon Moore vs. CM Punk
Rob Van Dam vs. Kevin Thorn
Matt Striker vs. Balls Mahoney
Sabu vs. Hardcore Holly

Punk goes over easy, as does RVD, Striker screws Mahoney, while Holly gets a surprise win with Heyman’s help. Then the next round has Punk vs. RVD and Striker vs. Holly. Striker gets the upset win over Holly after Mahoney screws Holly on accident, setting up a match between those two at the pay per view as well. In the main event of this edition of ECW, Punk and RVD face off, but Heyman marches out and distracts RVD allowing Punk to get the win.

RVD then assaults Heyman alongside Sabu. The next week, Heyman orders RVD vs. Sabu, with the winner getting a World Title Shot and the loser getting suspended without pay for thirty days.

Stemming over their jealously of one another with Kelly Kelly and the disillusion of their tag team, Knox and Test start brawling every which way, with Kelly Kelly essentially saying that she can’t take the fighting anymore, and at December to Dismember, she’ll become the winners manager.

Kelly Kelly on a Pole?
Mike Knox vs. Test

So lets book this shit.

We open up the show, with the highlights of the Security Team and Khali/Daviari brawling, which leads to Heyman’s announcement of the new tag teams.

MNM and the Hardy’s come out and have the same stellar match that they had at the event previously. MNM though goes over and advances to later on in the night.

Dreamer and Sandman can’t really wrestle like you’d expect the Hardy’s and MNM to do, so what you’d do is have Terkay beat up Dreamer and Sandman all match until Burke gets the tag, the faces come back hard, and use Burke to knock Terkay off the ring apron, finishing the match with a Dreamer DDT for the win.

Balls gets beat down hard by Holly. Holly, who came off of that massive back wound and earned the fans respect, is going to get a decent push as Heyman bestows the name “Hardcore” on him in perpetuity. This allows WWE to then switch to Extreme Rules, as only Holly can have a Hardcore match from here on out.

Rob Van Dam and Sabu do what RVD and Sabu does well, but instead of RVD winning, Sabu betrays RVD and sides with Heyman, beating RVD with Heyman’s help.

Knox and Test do what guys like them do best, which isn’t much. Knox out paces Test and establishes himself as a dominant force, but Kelly Kelly’s attempt to help Knox backfires as Test catches a slapjack, and hits Knox with it. Test wins and Kelly Kelly reluctantly goes with Test.

In the battle royal, it comes down to Guido, Stevie Richards ,and Thorn, but as they’re brawling a man runs in from the audience, lays out everyone, tossing them to the floor, and rips off a mask revealing the debuting Marcus Cor Von (Monty Brown). Cor Von wins, gets the TV title shot and laughs maniacally as everyone watches from the ringside floor.

For the TV title, CM Punk gets the win over Striker and becomes “the next guy in waiting”, and “the worker of ECW”. As he’s celebrating post match, we get Marcus Cor Von running in and pouncing him off the ring apron through a table.

The ECW World Tag Team Title Tournament ends with MNM taking on Dreamer and Sandman. MNM is able to showcase their talents on Dreamer/Sandman but eventually they break down and Sandman is able to take out the non-legal man with his kendo stick as Melina tries to get the referee to watch. Dreamer again hits his Dreamer DDT on Mercury, get the win and Sandman and Dreamer become the tag team champions.

In the main event, Lashley launches himself through the cage to take out Big Show as he enters the match. With the cage now destroyed, Paul Heyman makes it a pinfall/submission with a cage exterior. The two men use the cage to beat up each other, and at a point Big Show throws Lashley through the other side of the cage. After a brawl around the arena, Sabu tries to take out Lashley, but is taken out by the intended target. After Heyman and Holly try help Show, the ECW “Originals” (sans Sabu) run in and chase the traitors, and Holly from ringside. Lashley ends up hitting three spears on Show for the win and the title.

The show closes with all the face champions and RVD coming out to “accept” Lashley and CM Punk into the ranks of “True ECW Wrestlers”.