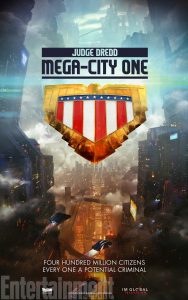 Early report today. We have a lot of content churning out tonight, and I still need to think of a new WCW. Remember, WrestleCorp is on tonight at 9 p.m. EST. So make sure to tune in.

Judge Dredd Rides Again – Dredd is about to get a third stance at life, with the show “Judge Dredd: Mega-City One” being formally announced by IM Global and Rebellion, an independent U.K. game developer.

The show is set in a future where the East Coast of the U.S. has become a crowded and crime-ridden megalopolis. It will be an ensemble drama about a team of Judges — futuristic cops invested with the power to be judge, jury, and executioner — as they deal with the challenges the future-shocked 22nd century throws at them.

No word yet if Karl Urban will reprise his role or even if the show will take place in the same canonical universe as 2012’s “Dredd”.

Deadpool Gets Animated Show – “Deadpool” is getting an animated series on FXX by Donald and Stephen Glover. Donald Glover is currently the star and leading force behind “Atlanta”, which is co-written by his brother, Stephen. No word yet on if Ryan Reynolds will reprise his role, many seem to think he will, but who knows.

Fox Beheads Long Running Show – Fox has brought down the ax on “Sleepy Hollows” after four seasons. The show was based off of “The Legend of Sleepy Hollow”, which debuted to strong ratings before losing about 80% of their audience over the run of the show. Which is unfortunate as “Arrow” actress, Janina Gavankar was just brought onto the show in a major role.

Scott Snyder Done with Batman? – Announced by Scott Snyder himself, apparently this current “All-Star Batman” arc with Sean Murphy is going to be his last, “…proper Batman for a while”.

Speaking to Newsarama, he revealed;

So, yeah… after this arc with All Star Batman, when I get to the story with Sean – which is the one I’ve been kind of waiting to do for three years or more – that to me very well might be the last Batman story that I do proper Batman for a while. It’s sort of a capstone to a lot of things I’ve been thinking about with him over the years

Quick Hitters – Lorna Dane/Polaris will not have her signature green hair in “The Gifted”. Kevin Fiege confirms that The Watchers are shared by both Fox and Marvel.