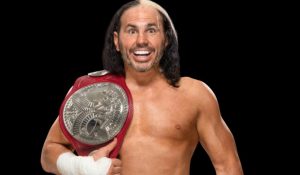 Broken Universe Update – PWInsider reports that TNA Entertainment filed for trademarks on “Broken Matt, Brother Nero, Vanguard1 and “Broken Brilliance” on April 28th. The trademarks are standard character marks for merchandise including DVDs, clothing, posters, and the like, as well as “ongoing wrestling exhibitions” and the usual things that go along with a character mark.

The move to trademark comes almost two months after Matt Hardy filed for his own trademark for Broken Matt Hardy. Impact claims that their contract with the Hardys stipulate that the company owns all IP creations, which if true would mean that the gimmick couldn’t go with Hardy when he left. The filing for a trademark is likely to cover their bases for the legal battle to come.

Brock Lesnar Update – The Wrestling Observer (via Wrestlezone.com) reports that the current plan is for Brock Lesnar to face Braun Strowman at WWE’s Great Balls of Fire event later this July. Other potential opponents WWE has teased for Lesnar include Seth Rollins and Finn Balor. The report also mentions if Lesnar vs. Strowman takes place, they will likely have a rematch at Summerslam in August. Additionally, Lesnar is not expected to work the Extreme Rules PPV on June 4 in Baltimore. Per the report, the current lineup for the event would feature Braun Strowman vs. Roman Reigns, Finn Balor vs. Bray Wyatt, Seth Rollins vs. Samoa Joe, and Dean Ambrose vs. The Miz.

Well at least he will wrestle before SummerSlam. See this is what I hate about Lesnar being champion. I get it, they see him as this “box office attraction” but damnit as soon as the WM match was set, I knew it wasn’t a good idea. I have no idea with Lesnar being a competitor but when he is a champion and is GONE is what I have a problem with. I hope he doesn’t hold it till Mania as rumors suggest.

Brie Bella Update – Brie Bella posted a new video blog on her and Daniel Bryan’s baby after the two had a bit of a hospital scare. She released the video from the hospital to provide an update on the birth of her daughter Birdie. She is about 5 days late but also they encountered a problem with baby Birdie’s breathing but everything is ok after spending the night at the hospital. She was definitely tired being there all night and all and are hopeful to meet Birdie this weekend. On behalf of everyone here at NerdCorp, we wish a healthy birth in the very near future.