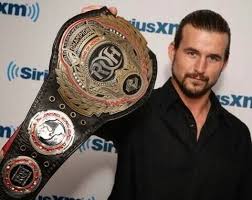 A major rematch, where’s Cole going and more on this busy news day. Personally I’m hoping Adam Cole goes to Impact Wrestling. They need someone of his caliber of talent, but who knows if thats even in the cards. Lets jump in, Space Monkey Mafia.

Where is Adam Cole Going? – Adam Cole isn’t going anywhere near the WWE, at least not yet. Apparently, according to Dave Meltzer, the former three-time ROH World Champion is being persuded by everyone. Yes, that means WWE, Impact Wrestling, AAA, NJPW, Lucha Underground, you name it. Cole is in demand, and could be a huge get for any promotion that isn’t the WWE. The problem with him going to the WWE is that he’d be just another cog in the machine. There wouldn’t be much for him in the way of room to grow and undoubteldy he’d end up derailing someone’s push. That’s to say if the WWE doesn’t ruin his run like they’ve done to so many.

Why Was Jerry Lawler Upset With The House of Horrors Match? – It’s not very common that WWE talent are allowed to voice their displeasure about something in the compnay without go ahead from the higher-ups. Apparently the WWE isn’t happy with the House of Horrors match as they’ve semeling allowed Jerry Lawler to share his not-so-flattering thoughts about the match. Here’s what he had to say;

I was so looking forward to the ‘House of Horrors’ match because I’m such a big horror movie fan. I’m such a fan of these kind of things. I was really, really excited about this…The WWE, they have the opportunity and they have the people to put together some really great special effects. I guess my problem was I got my expectations up too high. I guess I expected more scary stuff. I’m not scared of baby dolls.

Absolutely. I think, and I’ve stated it a lot, I think it’s something the fans want to see and I’d definitely like to get into it with Brock. He’s very intense. It has got to be believable. I think that’s part of it too.

Jack Swagger Name Update – Swagger recently revealed that he doesn’t own the rights to the name, but he’s going by “Formerly Known as Jack Swagger” to get around legal loopholes. Why he doesn’t just go by Jack Wrestling is beyond me.

Quick Hits – Kenny Omega and Okada to face off in rematch on June 11th at the Osaka-Jo Hall. Brock Lesnar to wrestle at Great Balls of Fire and SummerSlam in consecutive appreances with more scheduled for the fall and winter.