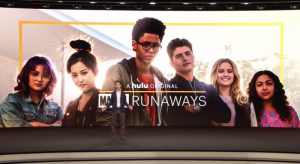 Aw it’s Wednesday. The most important day of our calendar week. It’s our flagship show, our reveal for Woman Crush Weekly, not too mention Brand Banter goes live on YouTube and of course, the daily content grind. Yay! Lets hop into Trailer-palooza.

Marvel Runaway’s Teaser Leaks – The new trailer for the upcoming Hulu show, “Runaways” has been approved for a season order, and will debut on the platform later this year (presumably). The show has a teaser image (above) and a teaser trailer (below) but it might not be up for long, knowing how Marvel is. It looks…fine…

The Defenders Trailer – The Defenders finally have a trailer, and hey, Netflix, WE LIKE OUR SUPERHEROES IN COSTUMES! I don’t get the fetish that Netflix has to NOT put these individuals in their costumes . It angers me to no end. Ugh. UGH!

Dark Tower Trailer – The first trailer for The Dark Tower has finally debuted and I know nothing about this source material. The Gunslinger is interesting, but I didn’t dig it like I was thinking I would. I thought it was going to be darker and grittier. It felt more like a Young Adult novel to movie adaptation like we were getting a few years ago. That being said, there was some interesting acting, and I can’t underplay how much I dug Idris Elba in this role.

Quick Hits – Barry Allen from the future revealed to be Savitar. Captain America kills off Rick Jones, a minor player in Marvel stories. Josh Gad hints at playing/wanting to play The Penguin.